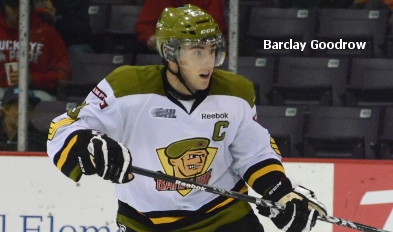 BRAMPTON, Ont. – The Brampton Battalion’s home-and-home series with the Mississauga Steelheads was scheduled as a holiday treat for fans in Peel Region, but the games have taken on a significance in the Ontario Hockey League race well beyond that.

The Battalion visits Mississauga at 2 p.m. Sunday before the return engagement at the Powerade Centre at 2 p.m. Monday in the Troops’ traditional New Year’s Eve game.

The Battalion defeated the host Sarnia Sting 3-2 Friday night to take sole possession of third place in the Central Division, two points ahead of Mississauga, which lost 4-3 to the visiting Oshawa Generals. The Troops have a won-lost-extended record of 18-14-5 for 41 points, while the Steelheads, 18-13-3, hold three games in hand.

“We definitely know what to expect out of Mississauga,” said right winger Barclay Goodrow. “This time of the year you start battling for playoff positions and home-ice advantage, and we’re right with them in the thick of things in the Eastern Conference.”

Both teams returned to action after the Christmas break Friday night, rendering recent performance somewhat less meaningful than usual, but the Battalion has won four of its last five games.

Mississauga is 1-6-2 since defeating the visiting Troops 5-2 in their most recent meeting, on Nov. 23. The Steelheads’ only win in that nine-game stretch was a 3-1 verdict Dec. 15 over the host Belleville Bulls.

“It’s really important playing them back to back, because you have an opportunity to advance in the standings,” said Goodrow. “We’re playing well right now, and we have to keep that momentum rolling into Mississauga.”

The Steelheads have won all three previous meetings this season, including a 4-3 overtime decision Oct. 8 in the only game at Brampton.

Left winger Riley Brace paces Mississauga with 43 points from 11 goals and 32 assists in 34 games. Centre Dylan Smoskowitz has a team-leading 24 goals and has added 12 assists for 36 points in 30 games.

The Troops may be cheered by a traveling contingent of fans that’s larger than usual. The attendance-challenged Steelheads have said that anyone showing a ticket to the Monday game will be given a complimentary ticket to the Sunday game at the Hershey Centre.

The Battalion got strong performances from three rookies at Sarnia, with Blake Clarke scoring two goals and Mike Amadio one while goaltender Jake Smith provided 24 saves. The Sting had won eight of its previous nine outings, the only loss coming 3-2 via shootout Dec. 7 to the visiting Windsor Spitfires.

“It’s great to start off the second part of the season on the right foot,” said Goodrow. “We had a big break, and I don’t think everybody had their legs with them against the Sting, but whenever you can get a win like that it’s a good feeling.”