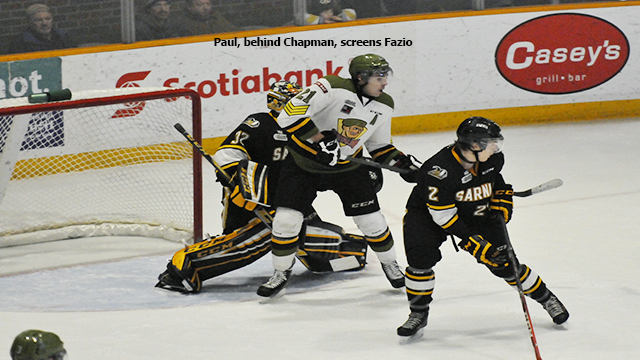 NORTH BAY, Ont. – Zach Bratina scored the winner on the power play at 15:25 of the third period as the North Bay Battalion rallied from a three-goal deficit to shock the Sarnia Sting 8-5 in an Ontario Hockey League game Sunday.

Nick Paul scored three goals, Brenden Miller and Jared Steege had one goal and one assist each and Marcus McIvor and Alex Henriksson also scored for the Battalion, which struck for six unanswered goals, including two empty-netters, after trailing 5-2 in the second period.

Starting goaltender Evan Cormier allowed four goals on 11 shots before giving way to Jake Smith, who gave up one goal on 13 shots.

The win before a crowd of 3,398 moved the Battalion’s won-lost-extended record to 8-2-4 for 20 points atop the Central Division. Sarnia is 6-7-2 for 14 points, second in the West Division.

Daniel Nikandrov had one goal and one assist for the Sting, which also got goals from Troy Lajeunesse, Nikita Korostelev, Pavel Zacha and Hayden Hodgson. Starting goaltender Justin Fazio gave up five goals on 26 shots before Taylor Dupuis allowed the winner among five shots.

“We were pretty good in the first period, but the bounces weren’t going our way, and that happens,” said Battalion coach Stan Butler. “In the second we really struggled, and I was very disappointed and thought at one point we lost our compete level. It was important to get that back.

“Nick got that third goal, which got us going, and Marcus made a nice play to put us in a situation where we were going into the third period down one goal instead of three. That’s something you can come back from.

“I felt bad for Cormier earlier. The goals weren’t his fault. Sometimes you have to change your goalie to try to get momentum going the other way.”

The Battalion, which trailed 5-4 after 40 minutes, tied it at 10:37 of the third period when Steege took a backhanded pass from a hustling Ray Huether behind the goal line and beat Fazio from deep in the right-wing circle, bringing Dupuis off the bench.

Bratina scored seven seconds after Zacha went off for slashing. Bratina collected a Miller shot-pass off the right skate and fired the puck off Dupuis’s glove for a seventh goal on the season.

Sarnia challenged Smith in the 17th minute, but he denied Korostelev at the right post and sprawled to keep Anthony DeAngelo from converting the rebound.

Henriksson and Paul, with his team-leading 13th goal, both scored into an empty net in the final minute.

Lajeunesse opened the scoring at 5:28 of the first period when his shot from the top of the left circle eluded Cormier after deflecting off McIvor’s skate, but Paul responded at 6:28, slipping between two defenders and beating Fazio high to the blocker side. Defenceman Miller then scored on the power play at 15:09, converting Mike Amadio’s rebound.

A frenetic second period saw the teams combine for six goals, starting when Korostelev connected off defender Miles Liberati’s shoulder 28 seconds into the frame. Nikandrov then scored on the power play at 5:56 after DeAngelo’s shot hit Miller in the face and landed on Nikandrov’s stick.

Zacha’s man-advantage goal on a one-timer from the right circle at 6:57 sent Cormier to the bench, and Hodgson welcomed Smith to the game with a breakaway score at 13:24.

Paul ignited the comeback with a power-play goal at 16:38, emerging from the right-wing corner to beat Fazio, and defenceman McIvor connected from the left circle at 19:15 off a two-on-one rush with Mathew Santos.

The Battalion visits the Peterborough Petes at 7:05 p.m. Thursday in the first of three consecutive road games. All can be seen live in North Bay on TVCogeco Cable 12 and heard on Country 600 CKAT.

BATTALION BULLETS: The Battalion wore chest patches, for the Juno Beach Centre, which will be on home sweaters through November … The Troops overcame a three-goal deficit to win for the first time since a 5-4 decision over the host Ottawa 67’s on Nov. 21, 2008 … Smith secured his 39th career win, seventh on the franchise list, one ahead of David Chant … Paul scored three goals in a 4-1 win Oct. 13 over the visiting Barrie Colts … A would-be tying goal by Henriksson was waved off at 8:33 of the third period for Brett McKenzie’s goaltender interference … McIvor played a 270th game, surpassing Luke Lynes for sole possession of fourth place on the franchise’s all-time list … North Bay went 3-for-5 on the power play. Sarnia was 2-for-2 … Mark Shoemaker was recognized as the Central Division’s academic player of the month for October … The Troops dressed 11 forwards and seven defencemen … The Battalion was without Riley Bruce, Owen Green, Zach Poirier and Calvin Gomes … Among Sting scratches were Jakob Chychrun and Jordan Kyrou, who, like Poirier, are at the World Under-17 Hockey Challenge, which started Sunday at Sarnia and nearby Lambton Shores. The Sting played the third of five straight road games, as their RBC Centre home is a venue for tournament games through Saturday … Lajeunesse was cheered by supporters from the nearby Dokis First Nation.