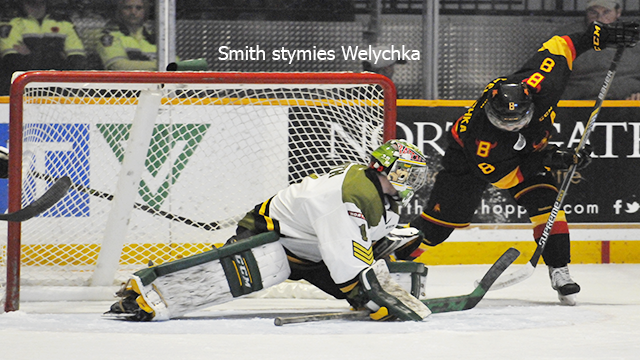 NORTH BAY, Ont. – Even longtime hockey men occasionally see a play that leaves them baffled. Such was the case for coach Stan Butler of the North Bay Battalion on Thursday night.

Stephen Harper scored the deciding goal in a 10-round shootout to give the Belleville Bulls a 3-2 Ontario Hockey League victory over the Battalion, but it was Adam Laishram’s goal in the sixth round that had 3,146 fans at Memorial Gardens and the team staffs shaking their heads.

Brett McKenzie scored to give the Battalion the edge in the shootout before North Bay goaltender Jake Smith stopped a Laishram attempt with the blocker near the netminder’s right post. On video, the puck next appeared in front of referee Mike Cairns, in the opposite circle, and slid into the net, all while Smith and his teammates started celebrating a win.

“I’ve watched the video two or three times,” said Butler. “I can’t tell whether the puck went up in the air and went in or it went off the referee or the player. It’s hard to tell. There’s no doubt Smith stopped the initial shot. The referee told me the puck bounced on the ice and went into the net.”

Alex Henriksson beat Belleville goaltender Charlie Graham in the first round of the shootout and Mathew Santos struck for the Troops’ third shootout goal in the ninth. David Tomasek connected for Belleville in the third and Michael Cramarossa in the ninth.

Jake Marchment and Jordan Subban scored in regulation time for the Bulls, who moved their won-lost-extended record to 10-3-0 for 20 points, second in the East Division. The Troops fired a season-high 50 shots at Graham through overtime.

“Their goalie was outstanding; he made a lot of great saves,” said Butler. “He’s the reason they’re coming home with two points.”

Kyle Wood and Brenden Miller scored in regulation time for the Battalion, 6-2-4 for 16 points, first in the Central Division, one point ahead of the Barrie Colts, who lost 7-1 to the visiting Sarnia Sting. Smith made 21 saves through overtime.

Belleville carried a 2-1 lead into the third period before defenceman Miller tied it at 3:39. Ray Huether fanned on an initial shot in the left-wing circle, but Miller snapped the puck over Graham’s glove for a third goal on the season.

The Battalion outshot the Bulls 10-1 in overtime, peppering Graham after Justin Lemcke went off for tripping at 2:10. Graham produced two huge saves, stopping a Mike Amadio shot through traffic from the right circle and sprawling to get the paddle on Nick Paul’s rebound attempt.

Defenceman Wood opened the scoring on the power play at 5:45 of the first period, snapping the puck between Graham’s pads from the left circle. The goal, assisted by Miller and Paul, was Wood’s fifth.

Marchment tied it at 17:44. Niki Petti kept the puck in at the blue line and fed it deep on the left wing to Marchment, who beat Smith high to the glove side.

Subban put the Bulls in front at 13:14 of the second period. Trying to step around Wood in the right circle, defenceman Subban was falling when he managed to put the puck off the right post past Smith.

The Battalion visits the Mississauga Steelheads at 7:30 p.m. Friday. The game can be seen live in North Bay on TVCogeco Cable 12 and heard on Country 600 CKAT.

BATTALION BULLETS: Mascot Sarge was on the lookout for fans in Halloween costumes, with some receiving autographed ministicks … Butler was credited with his 1,100th game with the Battalion. The Troops’ bench boss since they started play in Brampton in 1998-99, he has a won-lost-tied record of 512-536-52 with the franchise among his 1,232 OHL games, the others having come with the Oshawa Generals … Paul extended a points streak to five games in which he has four goals and two assists for six points … Subban is on a six-game points run during which he has 10 points, including six goals … The Battalion went 1-for-4 on the power play. Belleville was 0-for-5 … Opening line combinations included Paul centring Hampus Olsson on left wing and Amadio on right wing, McKenzie centring left winger Bratina and right winger Henriksson and Huether pivoting Steege on left wing and right winger Santos. Sherman centred left winger Mike Baird and Owen Green on right wing … The Battalion was without Riley Bruce, Zach Poirier, Mark Shoemaker and Calvin Gomes … Poirier and assistant coach Ryan Oulahen are at the World Under-17 Hockey Challenge, to be played at Sarnia and nearby Lambton Shores, as is Belleville’s Brandon Saigeon, a teammate of Poirier on the Canada Black entry … Andrew Thompson was the other referee.