Blujus blows one past Valiquette 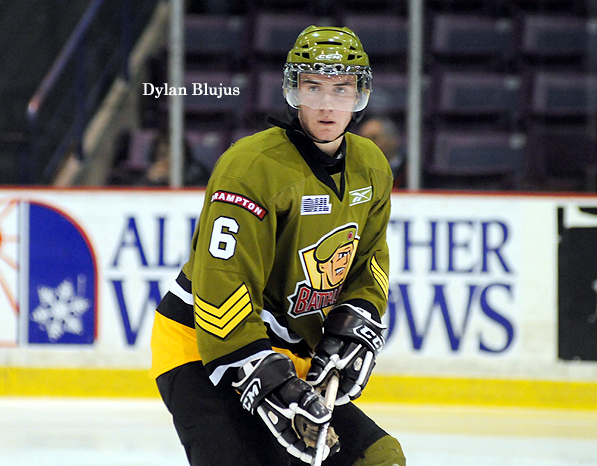 BRAMPTON, Ont. – A little patience with the puck paid dividends Sunday for defenceman Dylan Blujus of the Brampton Battalion.

Blujus was on the left point during a first-period power play against the Sudbury Wolves when the puck slithered out front from the crease. Blujus picked up the disc, waited for defender Ryan Hanes to commit and beat goaltender Alain Valiquette to the stick side. It was Blujus’s third goal of the season.

“The puck just squirted out,” said rookie Blujus, who accounted for the Battalion offence in a 3-1 Ontario Hockey League loss. “I skated in, held it for a bit and found a spot on the short side. Hanes jumped out to block the shot, but I’ve learned some patience from the beginning of the season. I think I’m smarter with the puck.”

Blujus was credited unofficially with eight shots on goal, all but two in the closing minutes as the Troops attempted to capitalize on a slashing penalty to Josh McFadden and later when goaltender Cody St. Jacques headed to the bench for a sixth skater.

“I was just trying to get my shots on the net to try and create opportunities for the forwards,” noted Blujus. “Every time I saw an open chance, I took it. We just needed a couple of bounces, but Valiquette played a great game for them today.”

The game was played one day after Blujus’s 17th birthday.

“I’d rather have a win than a goal. I thought we played a good game. We just couldn’t bury our chances.”

The goal ended a 17-game scoring drought for Blujus, a Buffalo native who also has 12 assists for 15 points in 44 games. He scored the Battalion’s first goal of the season in a 5-1 home-ice loss to the Erie Otters in the opener Sept. 24. He then waited 25 games for his second goal, which came Dec. 5 in a 7-4 victory over the visiting Sarnia Sting.

“After I got the first one I thought I’d get a few more, but it took a while to get the next one. I was a little worried, but I eventually got it.”

A third-round pick in the 2010 OHL Priority Selection, Blujus is one of four rookies on a six-man defence corps.

“It’s great for all of the young guys on defence to get a regular shift. It’s great exposure for us, and it really helps our confidence. We all get an opportunity in every situation. I don’t think any of us have anything to complain about. I hope we’re turning some heads out there. We’re all doing our job. We’re not trying to do too much. We’re just looking to do the small things.”

Blujus, six-foot-three and 184 pounds, said he’s getting used to the physical demands of the OHL.

“It was nerve-wracking at the beginning of the season, but it’s different now. I’m not nervous and, even though I’m not the most physical guy, I can take the hits. Guys like Zack Kassian and Marcus Foligno are great physical players, and I like going up against them.”