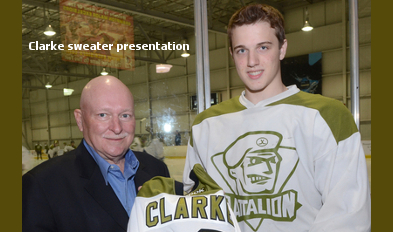 BRAMPTON, Ont. – The Brampton Battalion opened its orientation camp Saturday with 34 current and prospective Ontario Hockey League players taking part, including 11 who appeared in at least one game with the Troops during the 2011-12 season.

Forward Blake Clarke and defenceman Kyle Wood, the Troops’ first and third choices respectively in the 2012 OHL Priority Selection, were among the attendees.

Clarke, chosen 15th overall from the St. Louis Blues under-18s, was presented with a Battalion sweater by owner Scott Abbott after having signed an education contract with the club on Friday.

“It feels amazing to be a part of this organization,” said Clarke. “It’s a dream come true, and I’m really looking forward to next season and the next few years here. Hopefully I can contribute a lot to this team.”

“The scrimmages were great today,” said Clarke. “We had a good pace, and there were a lot of skilled players with the new draft picks and returnees. It was good to see where you stack up against everyone else.”

He started last season with the Fargo Force of the United States Hockey League, recording one goal and three assists for four points in 13 games before returning home to play for the Blues.

“A lot of the veteran guys have been great to me. They’ve just been kind of explaining a little bit of what goes on here, what to expect and how to prepare. It’s been great being able to see how great some of them are, and you can really learn from those players.”

Wood, the first of seven rearguards selected by the Battalion, scored one goal in the opening scrimmage.

“It feels great to be a part of this organization,” said Wood. “I’m really excited to be here, and I hope to be able to play here one day.”

A resident of Waterloo, Ont., who turned 16 on May 4, Wood was chosen from the Waterloo Wolves minor midgets.

“It was a good first day,” noted Wood. “The fitness testing was really tough this morning, but I stayed hydrated and got ready for the day mentally so I’d be ready for the games.”

Wood scored 12 goals and added 24 assists for 36 points in 41 games while compiling 70 penalty minutes with the Wolves. He also played two regular-season and five playoff games with the junior B Waterloo Siskins, registering two assists in a first-round playoff loss to the Stratford Cullitons.

“The biggest adjustment for me was getting used to the speed. The pace of the game was a good step up from what I was used to.”

Team White earned a 9-8 victory via shootout in the first scrimmage, while Team Green responded with a 9-6 win in the second game.

The second game saw Robinson and Feasey lead Green with a pair of goals each, while singles were recorded by Spencer Abraham, Zach Bell, Mark Raycroft, Nick Paul and Bryce Abraham. White responded with two goals from MacLeod, while Brenden Miller, Mike Amadio, Gomes and Small each had one.

Forward Alex Mutton suffered an injury on the track in fitness testing and didn’t dress for White.