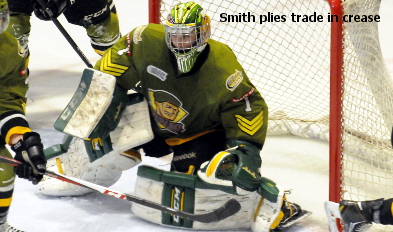 Smith, who saw action in two games in the Brampton Battalion’s first-round loss to the Sudbury Wolves last year, played all but 22 minutes of the Troops’ franchise-record 22 playoff games as they advanced to the OHL Championship Series in their first season in North Bay.

“I saw what playoff hockey was like last season,” said Smith, who relieved Matej Machovsky in the first period of a 5-4 overtime loss at Sudbury in Game 4 and got the start in a 1-0 overtime defeat in the fifth and deciding game, the Battalion’s last in Brampton.

Smith, an Oakville, Ont., resident who turned 19 on May 1, compiled a won-lost record of 13-9 in this postseason with three shutouts, a 2.54 goals-against average and a .905 save percentage.

“It was incredible. I had to make the most of my opportunity. What we did was special, not only for me but for the rest of the guys and for the city of North Bay. I just tried to give my team a chance to win every game, and fortunately we were able to do a lot of winning. It was a great ride, and hopefully we can do it again next season.”

The Battalion needed seven games to overcome the Niagara IceDogs in a first-round series, and Smith shone in the second round as North Bay eliminated the Barrie Colts in six games.

“Niagara has always given us a hard time. Getting through them was tough but a big accomplishment. Barrie was a tough team to beat. They had a lot of skill.”

In the Eastern Conference Championship Series, Smith outperformed Daniel Altshuller, his Oshawa Generals counterpart and a third-round draft pick of the National Hockey League’s Carolina Hurricanes, as the Battalion swept Oshawa to advance to the OHL final against the Guelph Storm.

“It was a great battle,” said Smith. “Every goalie wants to compare themselves to the best, and he’s one of the better goalies in the OHL. I just went out to outwork and outplay him, and that was the kind of battle it was for me all season.”

The Battalion lost 3-2 in overtime in the opener at Guelph before Smith provided 21 saves in a 4-3 overtime victory in Game 2. The visiting Storm scored two goals in the last minute of the third period to steal a 4-3 win in Game 3 and romped 10-1 in the fourth game. Guelph captured the fifth and deciding game 4-3 at home as Kerby Rychel scored the winner at 19:33 of the third period.

“It was a very tough series,” said Smith, who was relieved by Brendan O’Neill after allowing seven goals in Game 4. “It was a learning experience for me and all the other guys.”

Smith became the Battalion’s franchise leader in playoff appearances by a goaltender with 24. He’s the leader in career shutouts with three, posted in the opening games of the Niagara, Barrie and Oshawa series, and his 2.45 GAA is the best in Battalion playoff history. Smith and Thomas McCollum, who backstopped Brampton to the OHL final in 2009, share the franchise record for postseason wins at 13.

“He’s a kid who wanted to be in the net every night,” goaltending coach Rob Beatty said of the five-foot-11, 183-pound Smith. “He never backed down. He’s a competitor. He may be small in stature but, when the game starts, he wants to go in and battle for his teammates.

“We talked a lot during the season about being ready for the next game after you’ve gone through a tough one. Some goaltenders have trouble with that, but Jake knew he was the No. 1 guy in the playoffs, so he was always able to start again with a clean slate and deliver a performance that often made a difference. Those lineups he was facing had some guys who could really bury the puck.”

A ninth-round pick in the 2011 OHL Priority Selection, Smith played in 20 games as a rookie in 2012-13. With Machovsky having graduated, Smith assumed the starting role this season and played 42 games, compiling a won-lost-extended record of 23-12-4 with four shutouts, a 2.52 GAA and a .904 save percentage.

“There’ll always be up and downs every season,” said Smith who missed five games in November with a hamstring injury and another five in February with a strained neck. “Every player will go through slumps. It’s how you battle through that kind of adversity, and this team is a prime example of how you do that.”

Said Beatty: “Going in, we were banking on a guy who played 20 games and two playoff games the previous season, and O’Neill hadn’t played much in the OHL. The team struggled a bit over the first half, and Jake’s injuries set him back a bit. But after Christmas Jake ran with it. He decided nobody was going to get him out of the net, and his performances backed that up.”

“We have a great system that everybody buys into. The guys do whatever it takes to give us the best chance to win. It’s a great thing we have going on here.”

A long playoff run means a shorter offseason for the Battalion in preparing for its second campaign in the Gateway of the North.

“It’ll be great here next season,” said Smith. “We’ve all warmed up to North Bay, and the guys are a lot more comfortable up here. There’ll be a lot to look forward to for the fans and the city.”