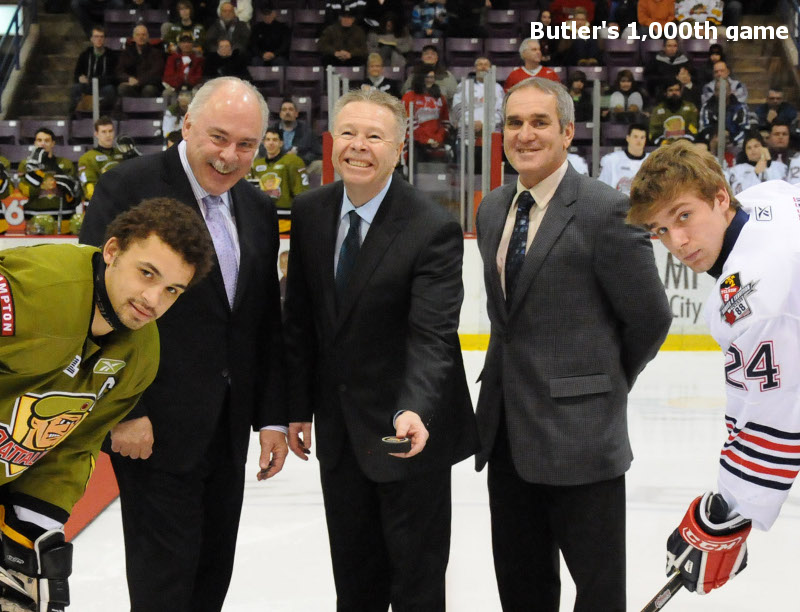 Goodrow scored two goals, including the winner on the power play at 2:36 of the third period, as the Battalion ended a two-game losing skid with a 3-1 victory Thursday night over the Oshawa Generals.

Sam Carrick scored into an empty net and Ian Watters earned two assists as the Troops moved their won-lost-extended record to 22-24-6 for 50 points, third in the Central Division and sixth in the Eastern Conference. Goaltender Matej Machovsky faced 26 shots before a crowd of 1,766.

Boone Jenner scored for Oshawa, which lost for the first time in four games. Goaltender Peter Di Salvo made 33 saves for the Generals, 28-15-8 for 64 points, second in the East Division and fourth in the conference.

Butler, who began his OHL coaching career with two seasons in Oshawa, was saluted for becoming the fourth league coach to be credited with reaching the 1,000-game mark. He was joined in a pregame ceremony by OHL commissioner David Branch and former referee Bill Prisniak, who officiated in Butler’s first OHL game, a 6-0 loss to the host Ottawa 67’s on Sept. 23, 1994.

“The thousandth game aside, this was a really important game for us,” said Butler. “We’re battling for a playoff spot. They’re a very good team, and this is a tough month for us and it’s important for us to find ways to win. I was proud of the guys. They put forth a great effort.”

The teams were tied 1-1 through two periods, but Goodrow broke the stalemate, sliding a Philip Lane pass under Di Salvo’s left pad from the lip of the crease.

“That was a great pass from Lane,” said Goodrow, who leads the team with 20 goals. “I just tried to get the goalie to open his legs up. That seems to be my go-to move this season. It was a great win. We’ve had some tough luck scoring goals lately. Stan’s done a lot for this organization. We knew it was a special night for him, and it was even better to get him a win.”

Di Salvo went to the bench for a sixth skater with 1:02 left, and Carrick scored into the vacant net at 19:37. The goal was Carrick’s 13th.

Goodrow opened the scoring at 2:05 of the first period when he broke in with Lane on a two-on-one rush and put a snap shot from the left-wing circle past Di Salvo’s blocker.

Jenner tied it at 7:45, converting the rebound of a Scott Valentine shot.

The Troops outshot the Generals 14-9 in the period. Machovsky scrambled to land on top of a Jenner shot from the deep slot in the 10th minute, and Di Salvo was quick at the right post to deny Craig Moore and Andreas Tsogkas in the 13th.

The Battalion, with a 13-9 edge in shots in the scoreless second period, had the best scoring chance when referee Joe Celestin awarded Scott Tanski a penalty shot at 18:08 after he was hauled down on a partial breakaway by Daniel Maggio. Tanksi’s shot glanced off Di Salvo’s stick, but the goaltender managed to keep the disc out of the net.

“I can’t remember the last time I had a penalty shot, maybe way back in my minor hockey days,” said Tanski. “I played with and against Di Salvo for a number of years in minor hockey, and going in on him brought back some memories.

“I didn’t really have anything in mind going in. I saw he was pretty far back in his net and I wanted to shoot, and I thought if I released it quickly I’d be able to sneak it by him. That would have been a big goal to give us the lead late in the period.”

The Battalion visits the Guelph Storm at 7:30 p.m. Friday. The game can be seen live in Brampton on Rogers Cable 10 and in Bolton, Caledon and Orangeville on Rogers Cable 63.

BATTALION NOTEBOOK: Butler and assistant coach Ryan Oulahen worked the Battalion bench without colleague Kelly Harper, who missed the game because of a family matter … The Battalion went 1-for-6 on the power play. Oshawa was 0-for-3 … The Troops are 12-11-3 at home. Oshawa is 13-9-4 on the road … The Battalion scored more than two goals through overtime for the first time in nine games since a 6-5 loss via shootout to the host Windsor Spitfires on Jan. 20 … Opening line combinations included Carrick centring left winger Stephon Thorne and right winger Tanski, Lane centring left winger Watters and Goodrow on right wing and Jonathan Johansson pivoting left winger Moore and right winger Tsogkas. Domenic Alberga centred Spencer Abraham on left wing and right winger Matt MacLeod … Tanski’s penalty shot was the Troops’ first at home since Dec. 16, 2007, when Thomas Stajan was denied by Ryan Daniels of the Saginaw Spirit … Battalion defenceman Cameron Wind returned after losing two games to a shoulder injury, and blueliner Jordan McNaughton played a sixth game as a callup from the junior B Strathroy Rockets … O’Neil missed a third game with a shoulder injury, while Santini sat out a fourth game with an injured ankle … MacLeod and Kyle Hope engaged in a first-period fight … The Battalion visits Oshawa on Feb. 21 for a Family Day matinee, the third of four meetings. The Troops downed the visiting Generals 3-2 in overtime on Dec. 12 … Two members of the Generals’ traveling party, head trainer Bryan Boyes and travel coordinator Gary Minacs, were with the club when Butler made his OHL coaching debut. Longtime Generals office manager Colleen Corner also was in attendance.