Hopefuls Harland, Huber on the ice 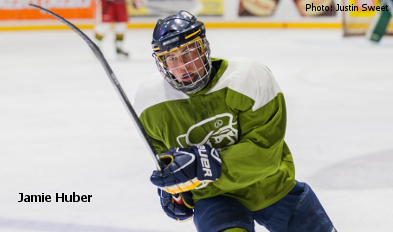 NORTH BAY, Ont. – For Steve Harland and Jamie Huber, it was a case of better late than never.

Between them, Harland and Huber were overlooked in a total of three Ontario Hockey League Priority Selections before being chosen in April by the North Bay Battalion.

Harland, an 18-year-old right winger from Toronto, was one of two sixth-round picks, while left winger Huber, a resident of Goderich, Ont., who turns 17 on Aug. 6, was tabbed in the ninth round. Players are first-time eligible for the OHL Priority Selection in the year they turn 16.

Both Harland and Huber took to the Memorial Gardens ice at North Bay’s orientation camp on the weekend.

“I had played double-A all the way up and didn’t play triple-A until this season,” said Harland. “I did well and was able to get noticed. Coming here is a great honour and a great experience. Getting picked as an 18-year-old was pretty surprising. It was pretty cool, too. I’m really excited for this opportunity.”

Harland, who scored 17 goals and earned 18 assists for 35 points in 32 games with the Toronto Young Nationals midgets, talked through the season with Battalion scout Dan McIlhone.

“Dan told me another team was looking at me too, so the Battalion might have to pick me earlier than they might have. I was playing a game that day, and a guy on the other team came up to me and told me I’d been picked.”

Harland’s team won the all-Ontario title and advanced to the Telus Cup, the national midget championship tournament, at Moose Jaw, Sask. Harland scored two goals and added four assists for six points in seven tourney games with the Young Nationals, who lost 3-2 in overtime to the Okanagan Rockets in the game for bronze medals.

“The tournament was an amazing experience. It was great to fly out to Moose Jaw.”

Harland, five-foot-10 and 149 pounds, was unofficially credited with four goals in four 45-minute, four-on-four on-ice sessions at the orientation camp.

“I hope to bring an offensive presence and make some nice plays. I need to keep working this summer, particularly on my physical game. I just want to play my game, and hopefully everything falls into place.”

Huber was selected from the Wingham Ironmen of the Western Jr. C League, in which he finished second in scoring, registering 41 goals and 41 assists for 82 points in 35 games. He added 29 points, including 13 goals, in 22 playoff games.

“It’s not every day that a player gets picked from Wingham,” noted Huber. “I didn’t think I’d get picked, but as the season went along I got some calls from teams and thought something might happen.”

Huber, five-foot-10 and 172 pounds, was credited with two goals at the orientation camp.

“It’s a lot faster and stronger in the OHL, and I need to keep improving. I tried to turn some heads in the games and tried to do some things on the ice. I’ll be working as hard as I can at the gym, and I want to come back to training camp in August stronger and ready to play.”

Like Harland, Huber figures to compete for a spot among a Battalion forward group that has lost wingers Barclay Goodrow, Ben Thomson and Matt MacLeod to graduation.

“I can bring scoring and playmaking ability,” said Huber. “I see the ice pretty well. Last season I played against a lot of bigger guys as a 16-year-old and had to fight for space on the ice. That league is a good place to play. It’s a good stepping stone.”