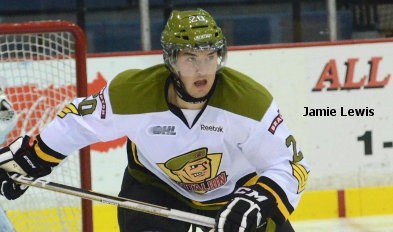 BRAMPTON, Ont. – The Brampton Battalion needed a break, a breakthrough, any kind of spark. In the aggregate, it was Jamie Lewis who provided the lift.

Second-year centre Lewis scored two goals and assisted on another to help send the Battalion to a 5-3 Ontario Hockey League victory Sunday over the Saginaw Spirit. It was the Troops’ first win since a 4-1 decision Oct. 4 over the visiting Kingston Frontenacs and ended a losing streak at four games.

“I’m so happy for Lewis,” said Zach Bell, who scored the insurance goal, assisted by Matt MacLeod and Lewis, midway in the third period. “He’s a great guy and he works really hard out there. It was a huge game for him.”

Said Bell: “We knew good things would happen if we played 60 minutes of hockey. We did that and got the result we were looking for.”

Mathew Santos’s unassisted goal at 2:40 of the first period energized the Battalion and got the team started to a 3-0 lead at the first intermission.

“We had a great first period, probably our best of the season,” said captain Barclay Goodrow of the Troops, who have a won-lost-extended record of 3-4-3 for nine points, fourth in the Central Division and one point behind the Sudbury Wolves. “We carried that confidence through the rest of the game.”

Said Lewis: “We knew this was a big game for us and we were all prepared. As soon as Santos got that goal, the energy on our bench just grew and we came into the dressing room after the period with a lot of confidence.”

Lewis, who made it 3-0 at 18:12 of the opening session, scored the eventual winner at 1:29 of the second, just 26 seconds after Eric Locke collected his first of two goals for Saginaw.

“He and (Patrik) Machac are our top two centres,” Battalion coach Stan Butler said of Lewis. “We need them to be good every night.”

Said Goodrow: “Lewis is a guy that we need to score on our team to be successful. He was a force out there for us.”

Lewis, a Richmond Hill, Ont., resident who skated between rookie left winger Nick Paul and right winger MacLeod, each of whom had two assists, was on the ice for four Battalion goals. Lewis and MacLeod played together on a line with the graduated Mitchell Porowski for much of last season.

“Lewis and MacLeod had really good chemistry with Porowski last year,” noted Butler. “We thought about who we have this year that plays somewhat like that and we came up with Paul. Maybe Lewis thought it was Porowski out there, because they both wore the same number.”

Said Lewis: “We practised together this week, but MacLeod and I played together last year, so we had the chemistry. With Paul, we want to just keep growing and getting better as a line.”

Bell’s late score, on a right-point shot that deflected off Saginaw’s Vincent Trocheck, was important. The Battalion surrendered a 3-1 lead inside the final eight minutes on Thanksgiving Monday in an eventual 4-3 overtime loss to the visiting Mississauga Steelheads. The Troops then allowed the tying goal at 18:42 of the third period before succumbing 2-1 via shootout to the host Belleville Bulls last Wednesday night.

“We definitely needed that one at that time,” Butler said of Bell’s first goal of the season. “Our confidence is fragile right now, and it gave us a little more confidence.”

Added Lewis: “MacLeod, Bell and I had been working on getting to the net on his shots from the point. Thankfully, it went in, and we kept the pressure on them the rest of the way.

“I’m so happy we won and snapped the streak. It feels great to have been a big part of it, but even better to get the monkey off our back with a big win.”