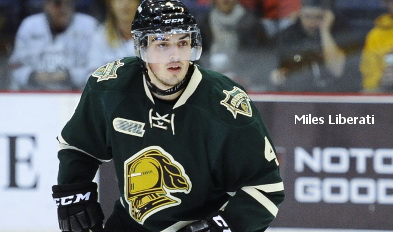 NORTH BAY, Ont. – Miles Liberati is happy to be joining the North Bay Battalion. For the Ontario Hockey League team, the 18-year-old defenceman’s arrival comes at an opportune time.

The Battalion, hampered by injuries on the blue line, acquired Liberati from the London Knights in a trade for overage rearguard Zach Bell, who was playing for the ECHL’s Ontario Reign, and a conditional fourth-round pick in the 2016 OHL Priority Selection.

“It’s exciting to get a new start in North Bay,” Liberati said via telephone Tuesday as he made his way north. “At first I was a little nervous. I’ve never been in this kind of situation before. It’s nice to know you’re going somewhere where you’re wanted and can fill a role.”

Liberati had one goal and three assists for four points in 22 games with London this season.

“I’m an offensive defenceman, and hopefully I can help as a puck mover who can get the puck to the forwards. I want to help out on the power play if I can. I’m glad to get the opportunity to play the kind of game I like to play.

“I like to think I can bring some leadership and tell guys how much hard work it takes to get where the Knights are. Hopefully we can get going in a positive direction.”

Liberati joins a team that has done without defencemen Kyle Wood for the whole season and Dylan Blujus for half of it, both because of knee injuries, and has used left winger Connor Jarvis, who suffered a separated shoulder Nov. 9, on the blue line for 14 of the 21 games he’s played.

Liberati may have faced restricted ice time with the Knights, who got defenceman Nikita Zadorov back from the National Hockey League’s Buffalo Sabres on Tuesday.

“It would have been tougher to get a spot where I’d play a lot,” said Liberati, a six-foot, 195-pound resident of Cheswick, Pa. “They have three overage defencemen there now, and Zadorov has come back. Everything happened at the right time for me.”

Said Liberati: “I felt pretty good at the beginning of the season but, as things were going on, I realized it might not be the best fit for me and thought something might happen.”

London took Liberati in the third round of the 2011 OHL Priority Selection from the Pittsburgh Vipers of the North American Prospects Hockey League. He spent the 2011-12 season at The Hill Academy in Vaughan, Ont.

“The Knights mentioned it to me when I was chosen. They wanted me to go there and develop. It was a good year.”

“For me, that season was a great experience even if I didn’t play much. I got to watch a lot of guys who were very experienced and might go on to play in the NHL one day and see the way they played the game and carried themselves. A lot of people didn’t realize that, even if I wasn’t playing against the other team’s best players, I was practising every day against top NHL prospects, and that made me better.”

Liberati said he hopes the trade will give him ample opportunity to show the Vancouver Canucks, who selected him in the seventh round of the NHL Draft last June, what he can do.

“I’m sure Vancouver will monitor my progress this season and see if I can improve enough to one day get a contract.”

Liberati is expected to make his Battalion debut in the Troops’ only game this week, a visit to the Barrie Colts at 7:30 p.m. Saturday.

“It’s nice to get a few days to practise and settle in. I’m excited to hit the ice in Barrie.”