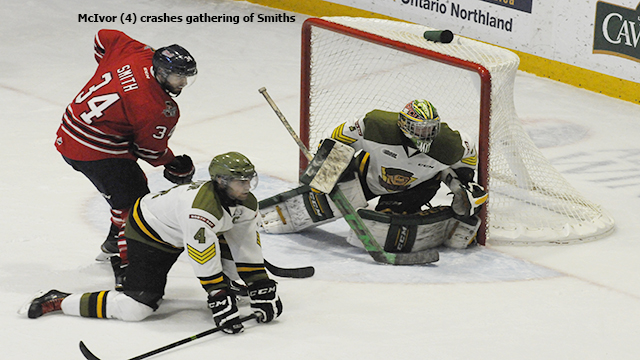 NORTH BAY, Ont. – Tobias Lindberg scored at 15:11 of the third period to lift the Oshawa Generals to a 2-1 victory over the North Bay Battalion in an Ontario Hockey League game Thursday night.

Brenden Miller scored for the Battalion on Special Olympics Night. Goaltender Jake Smith made 29 saves for the Troops, 4-2-3 for 11 points, second in the Central Division.

A crowd of 3,357 saw the Battalion, which swept Oshawa in the conference final last spring, play a season-high fourth straight home game in an 11-day period dating to Thanksgiving Monday.

“It was a very close game between two pretty equal teams,” said Battalion coach Stan Butler. “We’re close in these games. In the two games we’ve lost in regulation, we’ve had chances to win both games and lost both of them in the last five minutes. The game is 60 minutes long, and we have to play that way. It was the type of game where both teams had chances, and we didn’t capitalize on ours.”

Seconds after Appleby stopped Mike Amadio off a right-wing rush, Lindberg netted the winner, firing a wrist shot over Smith’s glove from the top of the left circle.

Oshawa’s Josh Sterk was called for tripping at 17:22, and Smith went to the bench for a sixth skater with 1:30 left, but the Troops failed to find the equalizer despite creating some havoc in the Generals’ goalmouth.

The teams were tied 1-1 after a first period that saw Oshawa forge a 13-8 edge in shots.

With the teams skating four a side, defenceman Miller opened the scoring with his second goal of the season at 4:51. Nick Paul dished the puck to Miller, who cruised across the slot to circumvent the fallen Appleby, who had collided with teammate Chris Carlisle, before firing the disc into an open net.

Oshawa’s Smith tied it on the power play at 14:21, sliding a Cassels feed into a gaping net from the deep slot.

Oshawa outshot North Bay 8-7 in the scoreless second period, which featured plenty of chances at both ends. Appleby was busy early, stopping Miles Liberati, who got loose in the slot in the third minute. Appleby foiled Kyle Moore on a breakaway in the fourth minute after he blew past Stephen Desrocher and Sonny Hertzberg.

Appleby sprawled to get his glove on a Mathew Santos shot from the lip of the crease with the Battalion on the power play in the 10th minute, and Cassels fired a wrister over the crossbar on a shorthanded breakaway in the 15th.

The Battalion visits the Niagara IceDogs at 7 p.m. Friday. The game can be seen live in North Bay on TVCogeco Cable 12.

BATTALION BULLETS: Both teams wore red skate laces, with others available for sale at various venues and events all day. KidSport presented a $25,000 cheque from Battalion 50-50 draws to Special Olympics. North Bay hosts the Special Olympics Ontario Winter Games from Jan. 29 to Feb. 1 … The Battalion drew a total of 13,487 to its four consecutive home games, an average of 3,372 per game. The Troops, who opened the schedule with seven of nine games at home, have drawn 24,246 to Memorial Gardens, an average of 3,464. Last year, after nine on the road to open the schedule, the club, which played its seventh home game on Nov. 7, attracted 24,538 to those home dates, an average of 3,505 … The Battalion went 0-for-5 on the power play. Oshawa was 1-for-4 … The Battalion’s Mike Baird completed a 20-game suspension incurred for abuse of an official in a second-round playoff game April 10 against the host Barrie Colts … The Battalion, which dressed 11 forwards and seven defencemen, also scratched Riley Bruce, Zach Poirier, Hampus Olsson and Calvin Gomes … Poirier has a charley horse from an unpenalized clip by Sean Day in a 4-3 win Sunday over the Mississauga Steelheads. Moore was recalled from the junior A Powassan Voodoos, making his OHL debut … The referees were Brent Coulombe and Seth Ferguson.