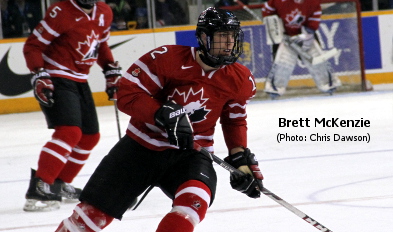 NORTH BAY, Ont. – The return of Brett McKenzie and Vincent Praplan from international commitments comes at a good time for the North Bay Battalion.

The Battalion, beset by a flu bug in recent days, dressed one skater short for a 6-3 Ontario Hockey League victory Sunday over the visiting Kitchener Rangers as left winger Ben Thomson and defenceman Brenden Miller sat out with the ailment. Miller dressed for warmup but couldn’t continue.

McKenzie scored three goals and earned one assist for four points in five games with Ontario at the World Under-17 Challenge, played at Sydney, North Sydney and Port Hawkesbury, N.S. He scored a first-period goal in Ontario’s 5-3 victory last Friday over Sweden in the fifth-place game at North Sydney.

The tournament featured teams from the United States, Russia, Sweden, the Czech Republic and Germany as well as Canadian entries representing Ontario, Quebec, Atlantic, West and Pacific. The U.S. defeated Pacific 4-0 in the gold medal game, while Russia downed Quebec 6-2 for bronze.

“It was a different feeling, because you’re seeing teams like Germany and the U.S. and all those other countries, so it was shocking, but you get used to it after the first couple of games,” said McKenzie, who spoke by telephone from Toronto before arriving in North Bay late Monday night aboard an airport shuttle.

Continuing weather-related havoc with flights saw left winger Praplan’s scheduled return delayed several times Tuesday. It wasn’t known when he might get back to the Gateway City after playing for Switzerland in the World Junior Championship at Malmo, Sweden, but both he and McKenzie are expected to be in the lineup when the Battalion hosts the Mississauga Steelheads at 7 p.m. Thursday.

“I was surprised with how physical it was with some of the other teams,” McKenzie said of the Challenge. “I didn’t think that Sweden and all of them were going to be physical at all, but they were pretty physical, and there are a lot of good ’97(-born) players out there.”

McKenzie, a resident of Vars, part of the municipality of Ottawa southeast of the city proper, was chosen in the first round of the OHL Priority Selection last April from the Oakville Rangers minor midgets, with whom he played with Ontario teammates Matt Spencer of the Peterborough Petes, Kyle Capobianco of the Sudbury Wolves and Jesse Barwell of the Steelheads.

“The other guys I’ve seen or I’ve played against or I’ve known for quite a bit. It was cool.”

McKenzie, who turns 17 on March 12, said he was handed a defensive assignment.

“My role on the team was shutting down the other teams’ top lines and not getting scored on. That was my role, which I learned pretty fast, and I think it helped me out.”

Despite the defensive duties he drew, his four points were tied for fourth place on the team.

“I think I met some of my expectations but felt I could do a bit more. With the role I was playing, I had to lower my expectations for scoring points a bit. But I think I got four or five points, which was pretty good, I guess, for being on the third line and playing a shutdown role.”

McKenzie, who missed five Battalion games while with Ontario, was selected 10th overall by the Troops as a centre but has been listed at left wing for 25 of the 35 games he’s played this season, scoring four goals and adding four assists for eight points.