Olsson to be ‘a pain’ for opposition 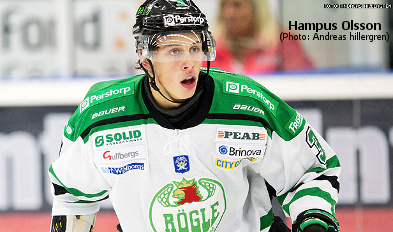 The Battalion selected right winger Hampus Olsson, a six-foot-five 212-pounder from Angelholm, Sweden, who turned 19 on April 20, in the first round of the Canadian Hockey League’s Import Draft on Wednesday.

Olsson will join Alex Henriksson, a first-round pick in the 2013 CHL Import Draft, marking the first time the Battalion has had two Swedes filling its import quota. Right winger Henriksson, also 19, produced 11 goals and 17 assists for 28 points in 68 games in his debut season and added 10 points, including seven goals, in 17 playoff games.

“Alex and I have been buddies since we were kids,” Olsson said Thursday via telephone from Turkey, where he’s vacationing. “He can help me with the routine, outside the rink and on the ice. When I spoke to him before, he said that it’s a great adventure and the hockey is awesome and quick and full of energy. He highly recommended it.”

“I’ll hit some people into the boards. I’ll stay in front of the net on the power play and screen the goalie. I’ll be a pain for the other team’s defence and score some goals.”

Olsson, a left shot, registered 13 goals and 24 assists for 37 points with 115 penalty minutes in 92 games over three seasons with the Rogle junior team, part of an organization based in his home town, a coastal community of 40,000 in southwestern Sweden.

“It helped me a lot. I got more self-confidence, and there’s more speed. I trained a lot with them, too. Every time I stepped on the ice with them, I was moving forward.”

He said he’s been preparing for a move to North America for some time.

“I was in some camps last year in the United States and I wanted to go, but my mom and dad said I had to finish school first. That was the best thing to do, for now I’ve graduated school. I’ve heard that everybody loves hockey in Canada. I’ve heard the league is very good.”

Stan Butler, Battalion director of hockey operations and head coach, said he looked for an older import who could help offset the graduation of overagers Barclay Goodrow, Matt MacLeod and Ben Thomson.

“Olsson is a big body. We felt that we had a lot of good Canadian prospects who are in the 1997, 1998 age group. Losing three overage forwards, we felt that if we were going to add a player we had to add one who was a little bit older and could come in and play for us right away.

“The one knock on him is his skating, but now the rinks are 15 feet narrower. I’ve heard he’s a very good kid. I talked to a lot of head scouts in the National Hockey League, and they feel he’ll fit in with the style of play we have. We’re trying to establish some size with our team.”