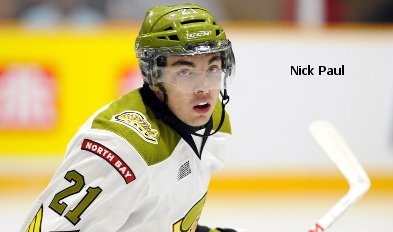 NORTH BAY, Ont. – Nick Paul, no stranger to waiting, was set for a long day Sunday at the Prudential Center in Newark, N.J.

Paul, a left winger with the Ontario Hockey League’s North Bay Battalion, and his family had journeyed to the facility, home of the National Hockey League’s New Jersey Devils, for the NHL Draft, a seven-round event conducted over the course of the day.

“The first round took at least three and a half hours, so we knew we were in for a long wait,” Paul said via telephone Tuesday. “We planned to be there a while. It was definitely exhausting.

“The second and third rounds seemed to drag, and that’s when the nerves really started to kick in. Once I saw some of the picks in the second round I really started to wonder, because at that point you never know what some teams and scouts want.”

Paul, a Mississauga resident who turned 18 on March 20, heard his name called in the fourth round when the Dallas Stars tabbed him with the 10th pick of the round, 101st overall. Paul, one of 37 OHL players chosen, was the sixth of nine Dallas selections. The Stars chose two other OHLers, centre Jason Dickinson of the Guelph Storm in the first round and left winger Remi Elie of the London Knights in the second.

“I wasn’t even thinking about Dallas when they picked me,” said Paul, who had a brief meeting with Stars representatives at the NHL’s fitness combine at Toronto in May. “There were some teams that would come up to pick that had shown more interest in me and we would start to get excited.”

Paul, six-foot-two and 202 pounds, was taken by the Battalion in the fifth round of the 2012 OHL Priority Selection from the Mississauga Reps major midgets after having been passed over in his first year of eligibility for the OHL process. He said the experience of being overlooked in 2011 came back to him Sunday.

“I had a big fear that my name wouldn’t be called. The nerves and the stress can really take a toll. I felt bad for the guys who went there who didn’t hear their names called. But I went to the draft thinking it would be a good experience to go and see what it was like and to spend some time in New York City.

“I can’t describe what it was like to hear my name. I wasn’t expecting to be picked by the Stars, and when I heard my name we were all shocked. There was so much excitement. It all started to sink in when I met some of their staff.”

Paul will get right to work with the Stars, heading Wednesday to Dallas for a development camp.

“They told me I was a big body and that’s what they liked. They told me my skating needs some work and that I need to be a more confident player on the ice. They told me that I was making that next step and the hard work was just beginning. They said they’d take care of me and build me into the player that I need to be. Hopefully everything works out in a couple of years. I think Dallas is a good spot. They’re going through a bit of a rebuild and they like their big bodies. I think I have a chance to fit in some years down the road.”

Paul joins defenceman Dylan Blujus as one of two drafted players on the Battalion roster. Blujus was a second-round choice of the Tampa Bay Lightning in 2012.

Paul scored 12 goals and added 16 assists for 28 points in 66 games last season, his rookie campaign with the Brampton Battalion, which relocated to North Bay for the 2013-14 season. He said he expects to be a different player next season.

“My style of play will be much different. I’ll be a lot more aggressive in the corners and I’ll carry the puck and score more goals. I want to be that guy the team relies on.”

Paul is the first member of a North Bay OHL club to be chosen in an NHL draft since 2002, when left winger Denis Yachmenev and goaltender Tyson Kellerman of the North Bay Centennials were selected by the Florida Panthers and Chicago Blackhawks respectively in the seventh round. Kellerman played 13 games with the Battalion in 2003-04.

Centre Nathan MacKinnon of the Quebec Major Junior Hockey League’s Halifax Mooseheads was the first overall choice in the 2013 NHL Draft, by the Colorado Avalanche.