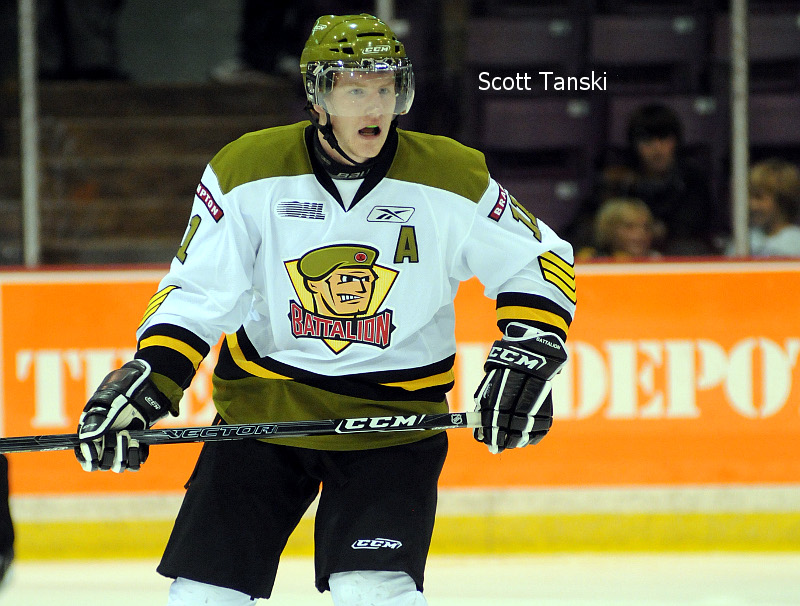 The Battalion, which has three games left over as many days to end the regular season, is sixth in the Eastern Conference with a won-lost-extended record of 28-30-7 for 63 points. The Troops visit the Mississauga St. Michael’s Majors at 7:30 p.m. Friday and the Oshawa Generals at 7:05 p.m. Saturday before hosting the Belleville Bulls at 2 p.m. Sunday.

The Battalion is four points behind the Kingston Frontenacs, who have two games left after a 6-4 victory Wednesday night at Belleville. Kingston hosts the Sudbury Wolves, five points behind the Troops, on Friday night and visits the Niagara IceDogs on Saturday night. Sudbury has three road games to play, including against Belleville and the Ottawa 67’s.

A Kingston win over Sudbury coupled with a Battalion loss at Mississauga would leave the Troops in sixth place and set up a best-of-seven conference quarterfinal against third-seeded Niagara. If the Battalion earns at least four more points and Kingston fails to take one, the Troops would claim fifth place and meet the fourth-place team, either Oshawa or Ottawa, if the Generals overtake the 67’s for the second seed. If Sudbury wins its three games and the Battalion doesn’t earn two points, the Troops would be seventh and face Ottawa or Oshawa.

“We’ve been playing playoff-type hockey for the last couple of weeks, so we need to continue doing that,” right winger Scott Tanski said Thursday. “We like having these tough matchups heading into the playoffs because that’s what we’re going to see once they start. It’ll give us an idea to see where we’re at right now. We’ll try to get as many points as we can and we’ll worry about who we have to play later.”

The Battalion has lost eight consecutive games to the Majors since a 4-0 victory at Mississauga on Feb. 26, 2010. The Majors, winners of seven straight, have laid claim to the Hamilton Spectator Trophy, awarded to the team with the best regular-season record.

“It’s about time we got a win against those guys,” said Tanski. “It would be huge for us, but the thing with those guys is, even with nothing to play for, their coaches won’t let them come out and be sluggish. They want to be ready for playoffs too, and we know they’ll be ready to go. They have a lot riding on this season. They’re hosting the Memorial Cup and want to go in as league champions. We have to expect a really tough game.”

Tanski, in his fourth OHL season, is about to play his 29th game against the Battalion’s Peel Region rivals, who provide the opposition eight times a season. Tanski also played all six games of the teams’ conference semifinal in 2009, which was won by the Troops.

“I think of all the games I’ve played against them, and that’s half a season against one team. The one thing that’s been consistent through all those games is they’re tough ones. The teams play similar styles. This is the kind of game that will really get us ready for the playoffs.”

The Battalion has won two of three meetings with the Generals, who eked out a 1-0 decision at home Feb. 21.

“If there’s still a chance we might play them, then that game will give us some idea of what we’ll see from them in the playoffs,” noted Tanski. “We’d love to get to the fifth spot; that’s been our goal for some time. We’ve had some good games against Oshawa this season.”

The Troops head into action off a 4-2 home-ice victory last Sunday over the Barrie Colts.

“Some wins this week would really help our confidence going into the playoffs,” said Tanski. “No matter who we play, we’ll be an underdog against a higher-seeded team. We need the mindset that anything is possible, and some wins before the end of the season will give us some momentum.”

A 12th-round choice in the 2006 OHL Priority Selection, Tanski is the Battalion’s active leader in playoff games with 37 and, barring injury, illness or suspension, is virtually certain to equal or pass the club record of 41 held by Brad Albert and Cody Hodgson.

“You soon realize the playoffs are a completely different game. All of the run-and-gun you might see during the season goes out the window, and everyone is doing their job, finishing the checks and playing a lot more aggressively. It takes four losses to one team to get knocked out of the playoffs, and every shift and every play is huge.”