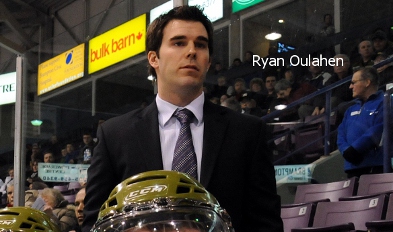 BRAMPTON, Ont. – Matia Marcantuoni scored one goal and added three assists to pace the Kitchener Rangers to a 5-1 victory over the Brampton Battalion in preseason Ontario Hockey League action Monday.

Radek Faksa and Ben Thomson had one goal and one assist each, while Ben Fanelli and Josh Sterk also scored for Kitchener, which avenged a 4-1 home-ice loss to the Battalion in the exhibition opener for both teams Sunday.

Kitchener starting goaltender Franky Palazzese stopped all 18 shots he faced in 31:30 of action before being relieved by Jack Moylan. He stopped 10 of 11 shots the rest of the way, turning in his best save on a point-blank effort by Andreas Tsogkas in the third period.

“I think if you asked Keegan, he’d say he would want a lot of those goals back, but you know he’s a competitor,” said Battalion assistant coach Ryan Oulahen.

“We kept him in the game, and at the end of the second period he made two really good saves. You could kind of see that he started to feel a little bit more comfortable, and he had a great third period.”

Said rookie Poirier: “We had a good start, had a couple of chances, but we didn’t capitalize, and they capitalized on theirs.”

The Rangers got off to a fast start, scoring two goals in the first period. Marcantuoni opened the scoring at 4:40, streaking down the right side and beating Wilson with a drive low to the blocker side. Defenceman Fanelli connected on the power play at 17:35, firing a screened slap shot from the high slot.

The Battalion’s best chance of the period came shorthanded when Philip Lane raced in on a breakaway, but Palazzese made a right-pad save. Palazzese also stoned Lane in front off a pass from Adam Lloyd with the Troops on the power play late in the frame.

Faksa made it 3-0 on a two-man advantage at 1:25 of the second period, banging home the rebound of a shot by Max Iafrate, and Thomson struck at 6:17, finishing a smooth passing play from Marcantuoni and Faksa. Thomson’s wrister from the top of the left-wing circle beat Wilson low to the blocker side.

Alex O’Neil and Kitchener’s Brett Clampitt squared off at 6:28 in what amounted to a wrestling match given the paucity of punches from Clampitt. They drew majors and game misconducts in keeping with preseason protocol.

Sterk scored the visitors’ final goal 22 seconds after the fight after Wilson mishandled the puck.

Poirier scored at 6:42 of the third period off a four-on-two rush after Zach Bell sprawled to break up a Kitchener two-on-one and the Troops counterattacked.

“I liked our third period,” said Oulahan. “I think we ended on a positive note.”

The Battalion plays its third of five preseason games at 2 p.m. Sunday when it hosts the Guelph Storm.

BATTALION NOTEBOOK: Oulahen and fellow assistant Jason Ward manned the bench while head coach Stan Butler watched from the media box … The Battalion went 0-for-3 on the power play, while Kitchener was 2-for-9 … Opening Battalion line combinations included Sam Carrick centring left winger Michael Mastrangelo and right winger Poirier, Tsogkas centring left winger Brandon Robinson and right winger Matt MacLeod and Patrik Machac pivoting left winger Lloyd and right winger Lane. Connor Jarvis skated between left winger O’Neil and right winger Michael Santini … Defence pairings were Jordan McNaughton with Bell, Cameron Wind with Dylan Blujus and Brenden Miller with Marcus McIvor … Carrick wore the captain’s ‘C’ for the game, while Wind, Lane and O’Neil were the alternates … Matej Machovsky backed up rookie Wilson, who saw his first OHL action. Wilson, 19, was a ninth-round pick in the 2011 OHL Priority Selection … Bell, Wind, Lane, Carrick and Santini also made their first appearances after sitting out Sunday … Wilson turned away a shorthanded chance by Brandon Lesway in the opening period … O’Neil missed an open net off a goalmouth scramble in first-period action … The Battalion heard iron twice in the final period as Robinson and Lane fired shots off the crossbar … Lane provided the crowd with a lift in the third period, landing two hard hits on the same shift on Zach Lorentz and Cory Genovese … The referees were Seth Ferguson and Darryl Wolfe … The Troops host Kitchener on Dec. 1 in the first of two regular-season meetings … The Battalion has road games against the Peterborough Petes and Guelph to complete its exhibition schedule.