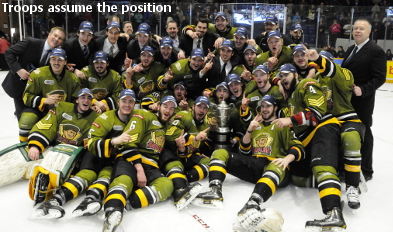 NORTH BAY, Ont. – Jamie Lewis of the North Bay Battalion darted across the top of the crease and knocked the puck past Belleville Bulls goaltender Charlie Graham, who had mishandled a shot by Vincent Praplan.

The goal at 14:18 of the second period at Belleville last Sept. 21 broke a 1-1 tie and propelled the Battalion to a 4-1 victory, its first representing North Bay.

The goal, Lewis’s first of eight during the Ontario Hockey League regular season, was his only game-winner.

That’s when his goal at 14:27 of the third period gave the Battalion a 3-2 victory that completed a four-game sweep of the Oshawa Generals in the Eastern Conference Championship Series. A raucous, sold-out Memorial Gardens crowd of 4,235 thundered its approval as the Troops took possession of the Bobby Orr Trophy.

Lewis has three goals in 29 career playoff games. The first two came in a first-round series against the Sudbury Wolves, the more recent having been scored March 28, 2012, in a road game the Battalion won 4-3 on Cameron Wind’s goal at 14:47 of the second overtime period. It completed a four-game sweep.

The Battalion, in its first season in North Bay after 15 years in Brampton, advances to the OHL Championship Series, where it will face the winner of the Western Conference final between the Guelph Storm and Erie Otters. Guelph, which hosts the fifth game Friday night, leads the best-of-seven series 3-1.

“I’m really happy,” said centre Lewis, “especially since this is the first year in North Bay. It’s been crazy.”

Lewis struck 3:20 after Dylan Smoskowitz tied the game for the top-seeded Generals. Lewis took a feed from Brenden Miller and rocketed the rubber from inside the blue line over the right shoulder of Oshawa goaltender Ken Appleby.

“I was surprised it went in,” said Lewis, who has three points in 16 playoff games. “It was close to the end of my shift, and Miller was going to dump it in and I was going to change. But he gave it to me, and I got it off my stick as quickly as I could. When I heard everybody scream, I thought, ‘It went in.’

“I’ve had a lot of chances over the games but haven’t put anything in, so to get that goal was life-changing. I’m glad we could give back to the fans.”

The second-seeded Battalion, which trailed three games to one in its first-round series with the seventh-seeded Niagara IceDogs, has won 11 of its last 13 games to earn a berth in the league final for the second time in franchise history.

“That time against Niagara was pretty scary,” said Lewis. “But the leaders in our room, guys like Barclay Goodrow, Marcus McIvor, Ben Thomson and Matt MacLeod, picked us up and told us we weren’t going to lose there. They made sure the guys gave everything they had for the last three games of that series.”

Lewis, who turns 20 on Aug. 22, said he’s still in awe of the reaction of fans to the Battalion’s inaugural season in the Gateway City.

“It’s night and day this year compared to Brampton. Playing in North Bay has got to be a challenge for a visiting team. Every person in town is behind every one of us. They’re the best fans in the OHL.

“If there’s a big play or a big hit, the fans are just as into it as we are on the bench, and whenever something bad happens they still play their role and try to keep us pumped up.”

Lewis, in his third OHL season, said the Troops appreciate having a home environment similar to ones they experienced on the road during their time in Brampton.

Lewis and linemates left winger Connor Jarvis and right winger Mathew Santos have been standout performers at both ends of the ice throughout the postseason.

“We’ll provide whatever we can,” said Lewis. “We love to get the team going and shutting down the other team’s top lines whenever we’re out there against them. I know every game that Santos and Jarvis will give everything they have on every shift. They’ll always be the hardest-working guys on the ice.”

Lewis and Jarvis were linemates with the Toronto Young Nationals minor midgets in 2009-10.

“I’m really familiar with Connor. Game in and game out, he’ll be the hardest worker on the ice. He’ll do whatever he’s told to do. He’s the heart and soul of Battalion hockey. He’s a grinder, smart in the defensive zone, and he can always help out the team. He’s one of the favourite guys on the team. He’ll be the first guy backchecking or the first guy in the corners.”

Santos, in his second season, has 16 playoff penalty minutes, tied for fourth on the team.

“If you get caught with your head down, he’ll knock you on your butt,” said Lewis. “I think he’s one of the hardest hitters in the OHL. He gets us a lot more space out there.”