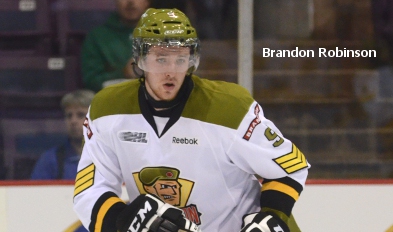 BRAMPTON, Ont. – Brandon Robinson put an exclamation point on his second-season improvement Sunday as the Brampton Battalion thumped the Niagara IceDogs 7-1 in both teams’ final game before the Ontario Hockey League’s Christmas break.

Left winger Robinson scored three goals, also adding one assist, to bring his goals total to nine. The Battalion’s first-round pick, seventh overall, in the 2011 OHL Priority Selection got off to a slow start this season but has scored six goals in the last five games.

“In the second half, I’m definitely looking to build off the last month or so,” said Robinson, who lost five October games to a hip flexor. “Everyone knows I didn’t start the way I wanted to. I started slow, but I’m not going to worry about it.

“As far as I’m concerned, the first month and a half didn’t happen. I’m focused on how I’m playing now and what I need to do to keep that going down the stretch.”

Robinson said the Battalion, which lost 4-1 Saturday night to the host Owen Sound Attack, produced a solid effort against Niagara in the teams’ fourth of six season meetings, improving its won-lost-extended record against the IceDogs to 2-0-2.

“It was a great team effort by everyone. We played them the same way we always play them, and we broke through.”

Right winger Matt MacLeod got the Troops off to a quick start, scoring 37 seconds after the opening faceoff, before Mitchell Theoret replied to produce a 1-1 tie through 20 minutes.

“That goal set the tone for the game for us,” Robinson said of MacLeod’s first of two scores. “They tied it, but we went into the dressing room in the first intermission knowing that after 40 more minutes we’d have 10 days off to rest, so it was time to empty the tank.

“It feels good to get a big win like this heading into the break. Hopefully we can carry this momentum with us into the second half and start making up some ground for home ice heading into the playoffs.”

Defenceman Marcus McIvor contributed four assists to join Robinson in his four-point effort, the Battalion’s first since March 4, when right winger Barclay Goodrow had two goals and two assists in a 5-2 home-ice win over the Mississauga St. Michael’s Majors.

“It’s definitely a career high,” said McIvor. “The puck seemed to be going our way today.”

The Troops physically outmatched the visitors at both ends of the ice, which McIvor suggested was important, given that the IceDogs went to overtime in a 3-2 win Saturday night over the visiting Sudbury Wolves.