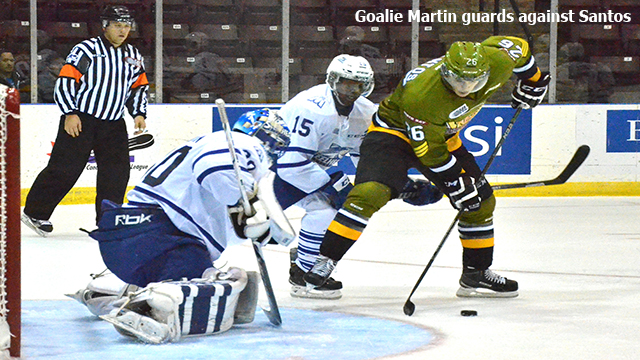 MISSISSAUGA, Ont. – Mathew Santos scored one goal and added two assists to power the North Bay Battalion to a 3-0 victory over the listless Mississauga Steelheads in an Ontario Hockey League game Friday night.

Goaltender Jake Smith made 29 saves to record the first shutout of the season for the Battalion, which also got goals from Marcus McIvor and Brenden Miller. Ray Huether earned two assists as North Bay improved its won-lost-extended record to 7-2-4 for 18 points atop the Central Division.

Smith, the victim of a bizarre shootout goal in a home-ice loss to the Belleville Bulls on Thursday night, recorded his 38th career win, tying David Chant for seventh place on the franchise list. Bryan Pitton holds the record with 64 wins.

Goaltender Spencer Martin faced 38 shots for the Steelheads, 5-6-1 for 11 points, third in the division.

The Battalion has defeated Mississauga in 12 straight meetings, including a sweep of six last season. The Steelheads’ last win was a 5-4 decision via shootout at Mississauga on Dec. 30, 2012, when the Troops represented Brampton. The Battalion downed its former Peel Region rival 4-3 on Oct. 19 at North Bay in the first meeting this season.

The Halloween night crowd at the Hershey Centre, many of whom appeared to be ghosts, was reported as 1,512.

With the teams skating four a side, McIvor opened the scoring at 6:59 of the first period, beating Martin high to the blocker side with a shot that deflected off the stick of defender Greg DiTomaso. Huether and Santos drew assists on defenceman McIvor’s first goal of the season.

The period saw the Troops direct 10 shots on Martin, who made two good early saves in close on Zach Bratina. Smith wasn’t troubled by any of the six shots he faced. The Steelheads’ best scoring chance came late when Smith pokechecked the puck off an onrushing Bryson Cianfrone.

Each team recorded 13 shots in the scoreless, penalty-free second period. The Battalion pressed Mississauga in the final minute, with Martin called on to stop a Santos backhander from the goalmouth, but the home side had the better chances.

Smith gloved a hard wrister by Sam Babintsev in the seventh minute and got tight to the post to deny Lucas Venuto in the 12th. Cianfrone failed to get his stick on a loose puck at the lip of the crease in the 10th.

Santos’s first goal of the campaign made it 2-0 at 5:13 of the third period. He chipped Jared Steege’s feed from behind the net over Martin’s glove.

Miller completed the scoring on the power play at 16:43. Bratina’s shot missed the net, but the puck rebounded off the end boards to defenceman Miller, who collected his fourth goal from deep in the left-wing circle.

Smith got his right arm on a drive off the left wing by Nick Zottl in the sixth minute and found a Stefan LeBlanc shot through traffic in the seventh. Smith, who earned his fifth career shutout, made two more stops on Zottl and denied Everett Clark from the left circle in the last minute.

The Battalion hosts the Sarnia Sting at 2 p.m. Sunday.

BATTALION BULLETS: The Battalion has an all-time record of 2-1-1 on Halloween, the most recent game being a 4-1 victory over the Plymouth Whalers at Brampton on Oct. 31, 2004. The North Bay Centennials defeated visiting Brampton 1-0 in overtime in 1999 … There were only three games in the OHL on Friday night, as ever more teams prove reluctant to compete with trick-or-treating … The Battalion went 1-for-3 on the power play. Mississauga was 0-for-4 … McIvor played a 269th game, tying Luke Lynes for fourth place on the franchise’s career list … The Battalion scratched Riley Bruce, Zach Poirier, Mark Shoemaker and Calvin Gomes … Like Poirier, two Steelheads, Sean Day and Michael McLeod, are at the World Under-17 Hockey Challenge to be held at Sarnia and Lambton Shores starting Sunday … The Bulls won 3-2 at North Bay after a 10-round shootout that featured a weird airborne goal, by Belleville’s Adam Laishram in the sixth round, that’s become an Internet sensation and drawn the attention of the National Hockey League. The Battalion won the longest shootout in franchise history on Brett Mackie’s 13th-round goal in a 3-2 verdict over the Ottawa 67’s at Brampton on Nov. 13, 2011. Mackie’s Waterloo Warriors face the Nipissing Lakers in Ontario University Athletics action at Memorial Gardens on Saturday night.