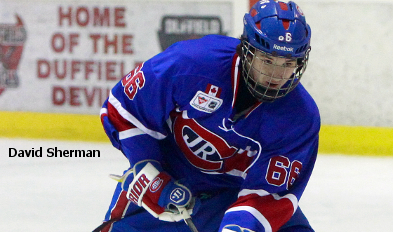 NORTH BAY, Ont. – It was offence from the outset for the North Bay Battalion in the Ontario Hockey League Priority Selection last Saturday.

Faced with replacing overage forwards Barclay Goodrow, Matt MacLeod and Ben Thomson next season, the Battalion chose nine forwards among its 15 selections in the 15-round process. The club also landed five defencemen and one goaltender.

Centre Zach Poirier of the Upper Canada Cyclones minor midgets, who turns 16 on May 12, was North Bay’s first-round pick, 14th overall. He scored 21 goals and earned 17 assists for 38 points in 29 games and added 16 points, including eight goals, in seven playoff games.

“He was a very good player on a team that squeaked into the playoffs and took the Ottawa Jr. 67’s to seven games,” said Bob Wetick, Battalion director of scouting. “He’s a very tough, hard-nosed competitor. He plays a very physical game, but he has excellent puck skills and a really good touch around the net. He needs to work on his first couple of steps, but his skating and strength are fine now.”

The Battalion tabbed left winger David Sherman of the Toronto Jr. Canadiens minor midgets in the second round. Sherman, who turns 16 on May 17, had 21 goals and 16 assists for 37 points in 33 games.

“He’s a big, tall, lanky left winger with a really good touch down low,” said Wetick. “He’s a tough guy to take the puck off down below the faceoff dots. He uses his body well to shield the puck and he has a really good wrist shot. He has a nice touch around the net. He’ll need to get stronger in his lower body and legs and, when he does, he’ll pick up speed.”

Left winger Cam Morrison of the York-Simcoe Express minor midgets, who recorded 17 goals and 26 assists for 43 points in 32 games, was the third-round choice. He turns 16 on Aug. 27.

“His team underperformed during the season but had a good playoffs,” said Wetick. “He was their leading scorer and carried the team on his back when it came to scoring goals. He has really good size, and his skating improved over the season. He has a nice burst coming off the wing. He needs to adjust to the speed at the next level. We feel he can contribute offensively.”

The Battalion got 16-year-old right winger Kyle Moore of the Toronto Red Wings minor midgets, who was rated much higher, in the fifth round. Moore, whose older brother, Bryan, is a right winger with the Sault Ste. Marie Greyhounds, scored 13 goals and added eight assists for 21 points in 31 games.

“He was the Red Wings’ offensive leader. He has good puck skills; he can really handle the puck. He can shoot it and, if he gets as big as his brother, he’ll be a competitive kid, because he isn’t afraid to mix it up in the corners. I’d like to see how much he does over the summer and, if he can show us what he can do in training camp, he might be able to challenge for a spot.”

With the first of two sixth-round picks, the Battalion pegged right winger Steve Harland of the Toronto Young Nats midgets. The Troops’ oldest pick, Harland turns 18 on May 10. He produced 17 goals and 18 assists for 35 points in 32 games.

“He played on a team that won the All-Ontarios and is now off to the Telus Cup,” noted Wetick. “He’s among the team’s leading scorers and he has a good touch around the net. If he can get himself ready over the summer, he can challenge for a spot on the right side.”

In the eighth round North Bay selected six-foot-three, 189-pound right winger Kyle Thomas from the South Central minor midgets. Thomas, 16, had eight goals and 12 assists for 20 points in 34 games.

“He’s a huge body. His only limitation is his first couple of strides, but he has pretty good skill for a big man. He’s a real physical specimen right now. He’ll be better playing at a level against bigger and stronger players, providing he can improve his skating.”

In the ninth round the Battalion looked to five-foot-eight, 160-pound centre Jamie Huber of the Wingham Ironmen of the Western Jr. C League. Huber, who turns 17 on Aug. 6, produced 82 points, including 41 goals, in 35 games.

“He has a scoring touch. He’s not the biggest player in the world and, if he can make the adjustment to our level, he has a chance. Everybody likes goal scorers and, if he can come to training camp and impress, he’ll get an opportunity.”

North Bay’s last two forward choices were 16-year-old right winger Justin Brazeau of the New Liskeard Cubs minor midgets in the 13th round and centre Brendan D’Agostino of the Hamilton Bulldogs minor midgets in the 14th. Brazeau had 29 points, including 11 goals, in 30 games, while D’Agostino, 16, amassed 16 goals and 25 assists for 41 points in 40 games.

“Brazeau flew under the radar playing in New Liskeard,” said Wetick. “He has some potential to develop into a goal scorer. He needs to work on his strength and skating. D’Agostino had a good season but needs to get bigger and stronger. He has a decent skill base to contribute offensively, but he needs to work on his skating.”

Jacob Ramalho of the Ottawa Jr. 67’s minor midgets was the first defenceman chosen by the Battalion, in the fourth round. Ramalho, six-foot-two, 207 pounds, had five goals and 21 assists for 26 points in 30 games. He turns 16 on May 25.

“One of the delights in the playoffs was watching him go at it with Poirier,” said Wetick. “He’s a big, strong defenceman, and he’s a guy who flies under the radar when it comes to scoring points. He knows when to come in from the point and get to loose pucks. He has a very good shot and can play the body. It’s paramount for defencemen to be able to move and deal with the speed of the game, but he has the ideal physical size we like at the back.”

The Battalion pegged rearguard Nate Ellis of the Southern Tier Admirals minor midgets in the seventh round. Ellis, who turns 16 on May 29, recorded 15 points, including five goals, in 39 games.

“He’s a solid defenceman,” said Wetick. “He’s a steady player in his own end and makes good decisions and good outlet passes.”

Blueliner Mitch Livingston, 16, was selected in the 10th round from the Barrie Colts minor midgets. He had 10 points, including one goal, in 32 games.

“He’s a smart, solid defenceman with good size who plays the body well. He isn’t going to be a guy who’ll rush the puck, but he has good puck skills and makes good decisions.”

In the 11th round the Battalion tabbed defenceman Cameron Dineen of the New Jersey Rockets under-19s. Dineen, who turns 16 on June 19, had 27 points, including four goals, in 45 games.

“We saw him at the OHL Cup,” said Wetick. “He can really skate and handle the puck. He isn’t the biggest defenceman, but he can carry the puck and add some offence. It appears he’ll attend our summer camp, and we’ll get a better look at him then. We’ll see what his thoughts are about coming here to play.”

The club used its final selection, in the 15th round, on rearguard Carter McCormick of the Elgin-Middlesex Chiefs minor midgets. McCormick, who turns 16 on Oct. 20, had 12 points, including three goals, in 27 games.

“He has a pretty good skills package. He’s a good skater and a good puckhandler from the point.”

Goaltender Jack Ondrovic of the Ottawa Senators minor midgets was selected with North Bay’s second sixth-round pick. The 16-year-old compiled a 3.28 goals-against average with one shutout in 17 games.

“He had a very good playoff run,” noted Wetick. “He’s a big kid who moves fairly well. We prefer to take the slow, steady route with goalies, and hopefully he can find a spot to play next season to face older and better shooters. He’ll have time to develop.”