Troops battle back to beat Mississauga 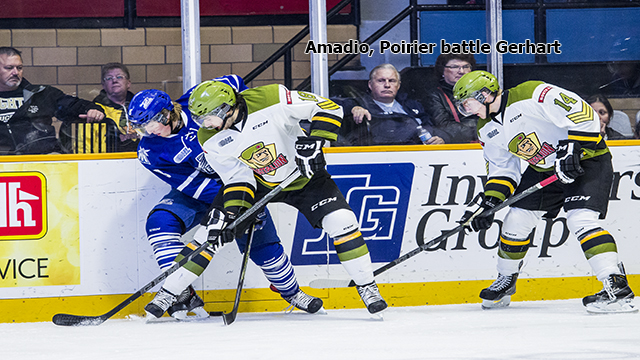 NORTH BAY, Ont. – Brenden Miller’s goal at 4:56 of the third period completed the North Bay Battalion’s comeback to a 4-3 victory over the Mississauga Steelheads in Ontario Hockey League action Sunday.

Nick Paul scored two goals, while Zach Bratina had one goal and one assist and goaltender Jake Smith faced 17 shots as the Battalion improved its won-lost-extended record to 4-1-3 for 11 points, second in the Central Division, two points behind the Barrie Colts with two games in hand.

Sam Babintsev had one goal and one assist and Lucas Venuto and Everett Clark the other goals for Mississauga, 4-3-0 for eight points, third in the division. Goaltender Spencer Martin faced 49 shots, the most the Troops have mustered in a game this season.

The Battalion posted an 11th straight win over Mississauga before a Memorial Gardens crowd of 3,136. The Troops, who swept the six-game season series in 2013-14, last lost to the Steelheads in a 5-4 decision via shootout at Mississauga on Dec. 30, 2012, in a battle of what then were Peel Region rivals.

“We made it hard on ourselves,” said Battalion coach Stan Butler, whose charges surrendered a 2-0 first-period lead. “For the most part we played a pretty strong game. It’s just one of those games where we had to continue to battle from behind and find a way to win.”

The visitors carried a 3-2 lead into the third period, but Paul’s team-leading eighth goal of the season tied it at 1:39. Martin got his glove on a Miller drive, but Paul, at the lip of the crease, knocked the rebound out of the air and across the goal line.

Miller then beat Martin high to the glove side from the edge of the right-wing circle. It was defenceman Miller’s first goal of the campaign.

Smith faced only five shots in the period but was sharp on two Venuto attempts in the 12th minute. Damian Bourne couldn’t convert a Jesse Barwell pass in the 17th minute, and the Steelheads, skating six on four, went without a power-play chance after Bratina was sent off for holding at 19:40.

Mississauga scored goals 24 seconds apart in the first period, with Venuto striking first at 4:01 when he swatted a puck home from mid air. Babintsev connected at 4:25 after Smith stopped an initial shot. Babintsev converted his own rebound from the left side.

The Troops fired a season-high 21 shots on Martin in the first period, with their best scoring chances coming late. Martin made a right-pad save on a Miller shot and sprawled across the crease to deny Paul’s attempt at the rebound. Martin appeared handcuffed by a left-point shot by Miles Liberati, but the rebound skittered through the crease and past Ray Huether’s stick.

The Battalion responded with two goals in a span of 49 seconds early in the middle period. Paul scored on a breakaway at 3:29, beating Martin high to the stick side. Bratina, who earned the lone assist on Paul’s goal, tied it at 4:18 as he took a pass from Brett McKenzie, charged off the left wing and slipped the puck between Martin’s legs. The second assist was Zach Shankar’s first OHL point.

Clark put Mississauga back in front at 6:54, scoring from the slot on the Steelheads’ only shot of the period. The Battalion twice this season has allowed an opponent two shots in a frame.

The Battalion tested Martin 17 times in the period. He produced strong saves on Kyle Wood in the final minute and also denied good chances by Hampus Olsson, Mark Shoemaker and Liberati.

North Bay wraps up a four-game home stand when it hosts the Oshawa Generals at 7 p.m. Thursday.

BATTALION BULLETS: The Battalion’s last regulation-time loss to the Steelheads was a 5-2 verdict Nov. 23, 2012, at Mississauga, with the Troops representing Brampton … North Bay went 0-for-3 on the power play. The Steelheads were 0-for-2 … The Battalion’s 49 shots eclipsed the 43 recorded Oct. 5 in a 6-2 win over the host Sudbury Wolves. Mississauga’s 17 shots were the fewest the Troops have allowed this season … Opening line combinations featured Mike Amadio centring left winger Paul and right winger Olsson, McKenzie centring left winger Bratina and right winger Alex Henriksson and Huether skating between Jared Steege on left wing and right winger Mathew Santos. Left winger Owen Green and Zach Poirier on right wing had various centres as the Battalion dressed 11 forwards and seven defencemen … Poirier didn’t return after being clipped by Sean Day in the second period, with no penalty called … North Bay scratched Riley Bruce, Mike Baird, David Sherman and Calvin Gomes … Mississauga was without Jared Walsh, Bobby MacIntyre, Cody Thompson, Kristopher Hamlin, Nick Zottl and Noah Robinson … Right winger Marcus Dickerson, a West Deptford, N.J., resident who was a 12th-round pick by Mississauga in the OHL Priority Selection in April, made his OHL debut … The referees were Jason Goldenberg and Brett Montsion.