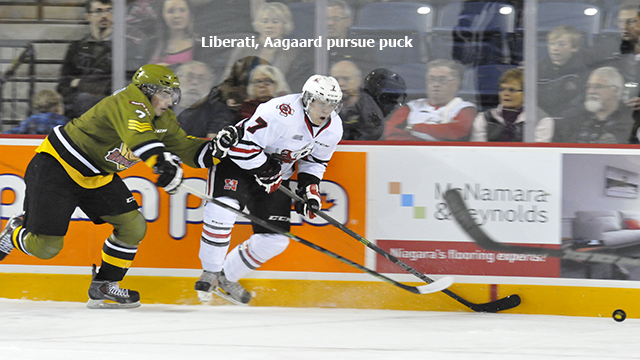 Jared Steege had one goal and two assists and Zach Bratina one goal and one assist, while Nick Paul and David Sherman also scored for the Battalion, which moved its won-lost-extended record to 5-2-3 for 13 points, second in the Central Division, two points behind the Barrie Colts. Brett McKenzie and Ray Huether each earned two assists, while goaltender Jake Smith made 27 saves.

Anthony DiFruscia and Hayden McCool scored for Niagara, which lost a third straight game to drop to 2-10-0 for four points, fourth in the division. Goaltender Stephen Dhillon faced 38 shots before a crowd of 3,596 at the new Meridian Centre.

The Troops rebounded after being edged 2-1 by the visiting Oshawa Generals on Thursday night.

“We’ve been losing some close games,” said Steege. “I’m happy to contribute in a big win tonight. Those extra points really catch up to you at the end of the season. We can’t be giving them up to teams like Oshawa.”

Bratina opened the scoring at 6:18 of the first period on the Battalion’s first shot. Seconds after Billy Jenkins rolled a puck between Smith’s legs and out of the crease, Bratina wired a wrister over Dhillon’s blocker from the top of the right-wing circle for a fifth goal on the season. McKenzie and Mark Shoemaker, earning his first career OHL point, were credited with assists.

DiFruscia made a strong move off the left wing across the goalmouth and beat Smith with a backhand deke at 9:59, but Paul replied at 19:46 as his snap shot off the right wing beat Dhillon, who appeared to be screened. The goal, assisted by Brenden Miller, was Paul’s team-leading ninth.

Steege’s third goal, the eventual winner, made it 3-1 at 9:06 of the second period as he hammered the puck over Dhillon’s glove from the left circle.

Each goaltender faced 11 shots in the period, with Smith called on to make the tougher saves.

Smith used his blocker to foil DiFruscia’s shorthanded breakaway in the 13th minute and sprawled to snare Jenkins’s power-play shot from deep in the right circle in the 19th. Smith also turned away Cody Payne at the lip of the crease and redirected a backhander from the deep slot by Mitchell Fitzmorris.

Dhillon gloved a Marcus McIvor shot through traffic from the right point in the 13th minute and denied a McKenzie attempt at a loose puck in the 14th.

Steege set up the Troops’ fourth goal, racing out of the penalty box and forcing Dhillon to get his right pad on a shot. McKenzie followed up, corralling the rebound and feeding it to Henriksson, who put the puck past the helpless Dhillon at 5:55 of the third period.

Sherman’s first career OHL goal made it 5-1 at 12:36. Huether barged to the net, but Dhillon poked the puck to the trailing Sherman, who converted from the deep slot.

Henriksson was credited with his fourth goal at 14:46 when a loose puck at the lip of the crease flipped over a prone Dhillon after appearing to be tipped by Owen Green, who earned his first career OHL point with an assist.

McCool completed the scoring at 16:07, converting a pass from behind the goal line.

The Battalion visits Barrie at 7:30 p.m. Saturday. The game can be seen live in North Bay on TVCogeco Cable 12.

BATTALION BULLETS: It was the Battalion’s first visit to Niagara’s new home near the Jack Gatecliff Arena, where the IceDogs played for seven seasons after relocating from Mississauga. The new building, which seats 5,300, incorporates the club’s offices, 25 suites and a four-sided video system over centre ice. Most fans enter via two walkways from a downtown street to the fifth and top level of the arena … The Battalion won the last OHL game at the old building 5-1, capturing Game 6 of an Eastern Conference quarterfinal March 30 en route to a series victory in seven games … North Bay went 0-for-4 on the power play. Niagara was 0-for-7 … Opening line combinations included Paul centring Steege on left wing and Mike Amadio on right wing, McKenzie centring left winger Bratina and right winger Henriksson and Huether pivoting left winger Mike Baird and right winger Mathew Santos. Sherman centred left winger Green and Shoemaker, a defenceman, on the right side … Baird returned from a 20-game suspension for abuse of an official in a playoff game April 10 at Barrie. Kyle Moore, who played against Oshawa, rejoined the junior A Powassan Voodoos … Baird and Cody Caron squared off 10 seconds after Henriksson’s first goal, each drawing a game misconduct for fighting off a faceoff … North Bay scratched Riley Bruce, Zach Poirier, Hampus Olsson and Calvin Gomes.