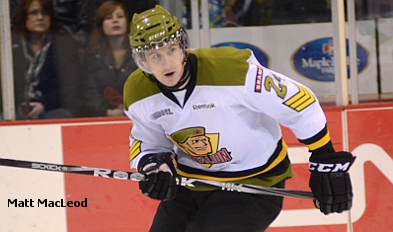 BRAMPTON, Ont. – With injuries and a suspension thinning the ranks, the Brampton Battalion’s depth has started to show.

The Battalion, which extended its Ontario Hockey League winning streak to four games with a 3-1 road victory Monday over the Peterborough Petes, has received an offensive spark in scoring from, among others, right winger Matt MacLeod and left winger Derek Froats.

“Hockey is all about opportunity,” said coach Stan Butler. “Obviously, they’re getting those opportunities now, and it’s up to them what they do with them.”

The Battalion, which beat the visiting Sudbury Wolves 5-4 in overtime Sunday and the host Mississauga St. Michael’s Majors 3-2 via shootout Friday night to sweep its Family Day weekend schedule, has a won-lost-extended record of 31-18-9 for 71 points, second in the Central Division and third in the Eastern Conference.

“To come out of that six-game losing streak and put four wins in a row together is huge for team confidence,” said MacLeod. “It shows the type of character we have in the room.”

Said Froats: “I’m just happy to be part of a winning team and have this opportunity. I’m just trying to make the best of it every game and every shift.”

After replacing Barclay Goodrow on a line with centre Sam Carrick and left winger Brandon Robinson early in the Sudbury game, MacLeod registered one goal and one assist. The freshly formed trio has combined for three of the Battalion’s last seven goals, with Goodrow having scored the preceding one.

“Playing with those two guys makes things really easy,” said MacLeod. “They have great positioning, they’re always there for support wherever you are on the ice, they play simple and they get pucks to the net. That’s why we’ve been successful these past couple of games.”

MacLeod replaced Goodrow after he drew a major for checking from behind and a game misconduct for a hit on Sudbury’s Michael Sgarbossa. Goodrow has been suspended indefinitely. Among the forward ranks, the Troops already were missing left wingers Ian Watters and Alex O’Neil and right winger Philip Lane.

“MacLeod competes hard, and I think that brings a little bit to that line, and Robinson and Carrick have had some good chemistry here for a while,” said Butler.

A third-round pick in the 2009 OHL Priority Selection, MacLeod has career-high scoring totals with eight goals and nine assists for 17 points in 46 games.

“It’s huge to contribute at times like this, especially with key guys out of the lineup,” said MacLeod. “It’s great to have a full team effort and have everybody contributing on the team.”

Froats, who played right wing alongside centre Patrick Machac and left winger Brett Mackie at Peterborough, scored his second game-winning goal among three since a trade from the Kingston Frontenacs.

“Froats has fit in very well with our group of guys,” said Butler. “He’s a really good team guy. He’s done a good job there, and he has a lot more skill than people realize. He’s just been very injury-prone in his major junior career, and hopefully we can get him healthy and reap the benefits of him this year and hopefully next year.”

Said Froats: “Right now it’s just having a coaching staff that believes in me and believes that I do have skill. It’s given me that little bit of confidence that I needed to handle the puck and take the extra second to get my head up.”

Acquired from Kingston for left winger Adam Lloyd on Jan. 9, Froats has played 18 games with the Battalion and has six goals and one assist for seven points in 38 games overall this season.

“I put a lot of pressure on myself to produce something, and I try to bear down in practice and make every opportunity count. Especially right now with Watters, Lane and Goodrow all out of the lineup, we need to rely on our secondary scoring to get something going.”

Left winger Mitchell Porowski scored at Mississauga off a MacLeod assist and netted the winner against Sudbury on a penalty shot. Machac precipitated overtime with a late third-period goal against the Wolves and scored an empty-netter at Peterborough.

Watters has been sidelined with a bruised leg muscle, while Lane has a concussion and O’Neil is to undergo shoulder surgery March 6. In addition, Dylan Blujus has exhibited concussion-like symptoms, and fellow defenceman Spencer Abraham has an injured left foot.