Troops get Moutrey in Saginaw trade 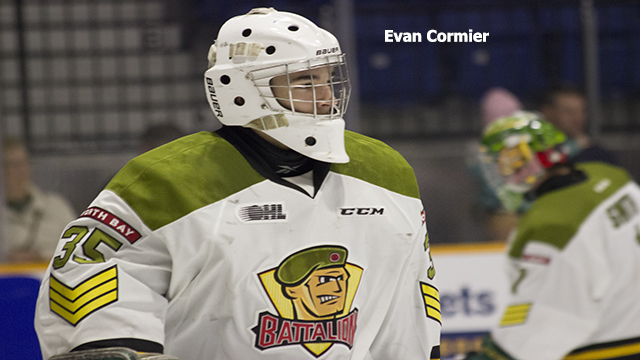 For Moutrey, 19, the Battalion gave up goaltender Evan Cormier and as many as six picks in the OHL Priority Selection. The picks are second-rounders in 2015, 2017 and 2019, a fourth-rounder in 2020 and conditional third- and fourth-round selections in 2018.

“He’ll be here sometime tomorrow, but not for practice,” Stan Butler, Battalion director of hockey operations and head coach, said of Moutrey, who was Saginaw’s captain.

Left shot Moutrey, six-foot-three and 220 pounds, has 15 goals and 25 assists for 40 points in 36 games this season while accumulating 40 penalty minutes.

Moutrey was Saginaw’s first-round pick, 15th overall, in the 2011 OHL Priority Selection from the York Simcoe Express minor midgets. In 235 games in three-plus OHL seasons, he has 48 goals and 85 assists for 133 points with 212 penalty minutes. In 21 playoff games over three years, the Toronto resident has three assists.

Moutrey is the second member of the Spirit, the former North Bay Centennials franchise, to join the Battalion in the Gateway City. The Troops acquired Zach Bratina from Saginaw on Dec. 27, 2013, in exchange for fellow left winger Blake Clarke.

Cormier, 17, has backed up veteran Jake Smith this season after appearing in three games in 2013-14, when the Bowmanville, Ont., resident played for the North Bay Trappers of the Northern Ontario Junior Hockey League.

In eight games in the current campaign, Cormier has a won-lost-extended record of 3-2-1, a goals-against average of 2.50, a save percentage of .882 and two shutouts. He was a fifth-round choice in the 2013 OHL Priority Selection from the Clarington Toros minor midgets.

“We’ll be looking to sign a goalie in the next couple of days,” said Butler, whose Troops visit the Ottawa 67’s at 7 p.m. Tuesday.

The Battalion, which defeated the Sudbury Wolves 6-2 Sunday, is 18-9-7 for 43 points, second in the Central Division, five points behind the Barrie Colts with three games in hand.

Top four to play for more
18 hours ago 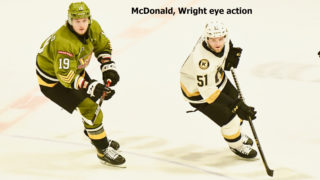 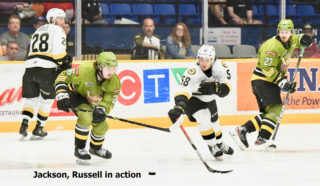 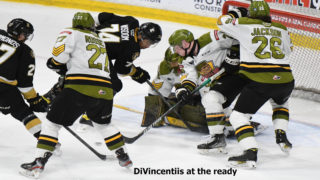