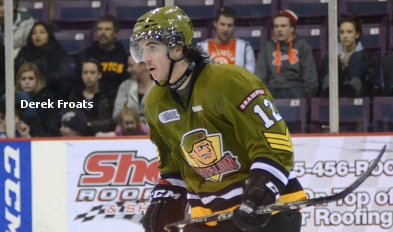 Brandon Robinson and Patrik Machac, into an empty net, also scored for the Battalion, which boasts a won-lost-extended record of 31-18-9 for 71 points, second in the Central Division.

Goaltender Matej Machovsky faced 21 shots in a third consecutive start as the Troops moved their record against the Petes to 17-2-0 over the last five seasons. During that time, the Battalion also captured a first-round playoff series in four straight games in 2009, the only time the teams have met in the postseason.

The Battalion, already battling a rash of injuries, was without right winger Barclay Goodrow. He has been suspended indefinitely after receiving a major for checking from behind and a game misconduct for a hit on Michael Sgarbossa of the visiting Sudbury Wolves in a 5-4 overtime win Sunday.

Derek Mathers scored for Peterborough, 25-27-6 for 56 points, third in the East Division. Goaltender Mike Morrison made 29 saves before a crowd of 2,627.

“We didn’t give them a lot of odd-man rushes and we did a really good job through the neutral zone slowing them down,” said Battalion coach Stan Butler. “We had really good backside pressure from our forwards backchecking, which allowed our defence to step up, given we had only five in the lineup today.

“The message heading into the third period was let’s battle hard, let’s compete hard and let’s make sure that everything they get they earn.”

Said Froats: “It feels good. I guess if I’m going to score, I might as well score big ones. We knew it was going to be a hard game today but we battled through, and our power play was working, our penalty kill was working and we came out on top.”

Machovsky stopped Joey West after he split the defence to break in alone nine seconds into the third period, and the Battalion survived a two-man disadvantage lasting 1:39 after Sam Carrick went off for holding at 6:00, joining Matt MacLeod in the penalty box.

The Petes thought they had scored during the two-man edge, but referee Kendrick Nicholson said he blew the whistle before the puck was jammed past Machovsky.

“To have a two-man advantage the way it was in the period really gave them a chance to get back in it,” said Butler. “They have a pretty good power play, so killing that was a really good momentum shift for us.”

With Morrison on the bench for an extra skater, Machac took a pass from Brett Mackie and put the puck into the empty net at 19:46.

Froats scored the only goal of the middle period at 1:29 to give the Battalion a 2-1 lead. He went to the slot to take a deft pass from Mackie in the right corner and drilled a shot high off the left post. It was Froats’s sixth goal of the season and his third since a Jan. 9 trade from the Kingston Frontenacs.

The Troops outshot Peterborough 13-5 in the period despite the Petes enjoying the only power play, their first of the game, after Andreas Tsogkas went off for tripping at 5:10.

Mathers opened the scoring at 3:01 of the first period, firing a shot from deep in the left-wing corner that deflected under Machovsky. Chase Hatcher and Steven Trojanovic drew the assists on Mathers’s eighth goal.

Robinson tied it on the power play at 19:12 with his 14th goal, converting the rebound off the end boards of a shot by Carrick. Brenden Miller had the other assist.

West got behind the Battalion defence in the 17th minute, but Machovsky went to his knees to deny the shot. Zach Bell and Mathers fought seconds later, with each receiving a major for the lacklustre scrap.

The Battalion hosts the Belleville Bulls at 7:30 p.m. Friday.

BATTALION NOTEBOOK: The Battalion went 1-for-4 on the power play. Peterborough was 0-for-5 … The Troops are 14-8-7 on the road, while Peterborough is 13-12-5 at home … The Battalion is 12-2-2 against East Division foes and 25-11-5 against Eastern Conference opponents … Froats’s first goal with the Troops was the winner in a 3-0 blanking of the visiting Plymouth Whalers on Jan. 19 … Carrick extended a points streak to six games, during which span he has scored five goals and earned four assists for nine points … Opening line combinations included Carrick centring left winger Robinson and right winger MacLeod, Machac pivoting left winger Mackie and Froats on right wing and Brennan Feasey centring left winger Mitchell Porowski and Jamie Lewis on right wing. Connor Jarvis centred left winger Geoff Bezruchko and right winger Tsogkas … Bezruchko, who played his third game with the Troops, was a 14th-round choice by Peterborough in the 2009 OHL Priority Selection and played 56 games with the Petes last season, registering five goals and one assist for six points. He was recalled for the Sudbury game from the junior A Orangeville Flyers, whose season ended in the opening round of the Ontario Junior Hockey League playoffs against the Aurora Tigers … Feasey, who made his Battalion debut in a 3-2 win via shootout over the host Mississauga St. Michael’s Majors last Friday night, played his second game with the Troops after again being summoned from the junior B Chatham Maroons … The second referee was Joel Washkurak … The Battalion, 3-0-0 against the Petes this season, visits Peterborough on March 8 to end the teams’ four-game series. The Troops have two home-ice wins, 4-0 on Oct. 23 and 5-3 on Feb. 12.