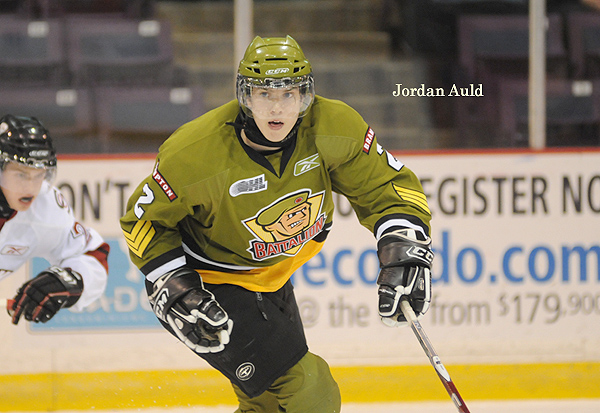 BRAMPTON, Ont. – Jordan Auld is one of four Ontario Hockey League rookies on the Brampton Battalion blue line. The way they’ve played thus far in the young season, it’s a hard fact to keep in focus.

Defenceman Auld, 17, saw plenty of action Sunday, playing at even strength and on special teams and scoring his first OHL goal in a 4-1 loss to the Guelph Storm. Auld, who has five assists in 11 games, beat Guelph goaltender Matej Machovsky, who made 51 saves, from the right point on a second-period power play.

“I was hoping to get a goal earlier, but I knew it would come,” said Auld, who has accumulated all his points on the power play. “I just tried to get a shot through to the net, and luckily it went in.”

The goal, which tied the game 1-1, came in the first half of a four-minute man advantage after Matt Finn was sent off for high-sticking, but penalty killer Taylor Beck scored the winner 59 seconds later.

“That was a tough one to give up,” Auld said of Beck’s goal. “I thought we could take advantage since we were still on the power play. But it was a bad bounce that went against us, and all the momentum shifted.”

One of seven defencemen on the roster, Auld sat out the season opener, a 5-1 loss Sept. 24 to the visiting Erie Otters. But injuries to several forwards resulted in the Troops dressing all seven rearguards in subsequent games. They went with six against Guelph, inserting Andreas Tsogkas up front, only after rookie Marcus McIvor was a post-warmup scratch with a sore ankle.

“It’s been pretty good,” said Auld. “I was disappointed I didn’t get to play in that first game, but I realized with the group of guys we have here that I’ll have to take my time looking for a spot. But I’ve really embraced my role and I’m having fun. It’s unbelievable to be able to play this much as a rookie.”

Toronto resident Auld, six-foot-two and 195 pounds, joins McIvor and Dylan Blujus, both 16, and 17-year-old Spencer Abraham as the first-year blueliners.

“The best thing about our group is that we can all play at this level even though we’re young,” said Auld. “It’s a real mixed bag of kids. The coaches get a lot of credit for putting us into roles we can succeed in. They have a lot of faith in us to let us know we can play in every situation at this level.”

An 11th-round pick in the 2009 OHL Priority Selection, Auld enjoyed a productive 2009-10 season with the Mississauga Reps midgets. In 80 games he had 16 goals and 50 assists for 66 points for a team that advanced to the title game of the Telus Cup, the national midget championship, at Levis, Que., last April before losing 3-2 to the Notre Dame Hounds of Wilcox, Sask.

“Having a chance to play in the Telus Cup was one of the lures of going to midget. Our coach talked about it, but we never really considered it until we got there. It was great to play against some of the top guys in the country at that level.”

Auld said he doesn’t regret forgoing a chance to play junior A in favour of a return to the midget ranks.

“Everybody wants to play junior A because that’s supposed to be better, but I think for some people midget can be a better option because you get to play a lot. You’re not just sitting on the bench. That was the best season of our lives. We played a lot and won a lot. It made me a completely different player from what I was in minor midget. I played a lot in every situation.”

Centre Tsogkas, a teammate of Auld with the Reps, also is in his rookie season with the Troops. Tsogkas’s goal in double overtime sent the Mississauga squad to the Telus Cup championship game.

“I’ve known him for many years and played a lot against him,” said Auld. “He’s a great kid who works really hard. I was hoping he’d get a chance here, and I think he’s shown he can play. It’s tough being the only rookie forward, but if he keeps working he’ll be fine.”